Abby Roque is a rising Ameican Ice Hockey player. She is currently playing in the Professional Women's Hoekcy Players Association for the Minnesota Section. Roque plays as forwarding for her team. Roque turned professional in 2016. Abby was part of the silver medal-winning team at the 2021 World Championships.

Abby Roque was born on September 25, 1997, in Sault Ste, Marie, Michigan. She is the daughter of Jim Roque and his wife, Julia Roque. Her father is a scout for the Arizona Coyotes and spent nine years as a head coach of the Lake Superior State men's hockey team. Abby has a sister named Emma. Roque graduated from Sault Area High School and enrolled at the University of Wisconsin. Talking about her physical appearance, Roque stands five feet and seven inches tall and weighs 70 kg.

Abby started playing ice hockey along with her father from six. There was no separate team for the girls to play while in High Schoo. While growing up, Roque played on boys' teams and was the only freshman to make the varsity hockey team. The player was part of the 2015 Regional Championship winning team. They were the state runner-ups in 2013 and 2014. Abby played with Team USA at the 2014 and 2015 IIHF U18 World Championships. 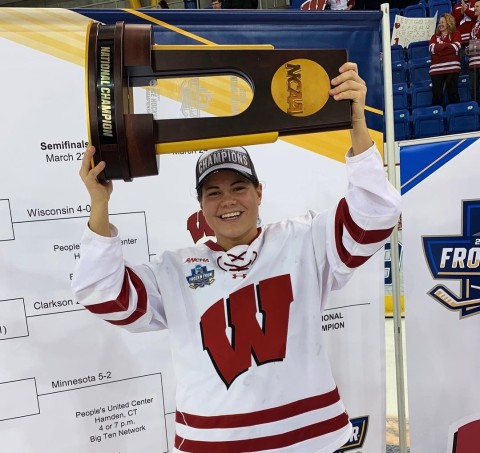 Abby shares a photo with NCAA title in her timeline SOURCE: [email protected]

After graduating from High School, Roque received numerous offers from universities and committed to playing for the University of Wisconsin. She played in all forty games in her freshman year and scored 28 points with eight goals and 20 assists. Abby was named the WHCA Rookie of the year at the end of the season. In her sophomore year, The player appeared in all thirty-eight games and led the team to score 41 points from 11 goals and 30 assists.

Abby was appointed vice-captain for her junior year and played in all 36 games this season, helping UW to a WCHA regular-season title. The following year, She graduated from the University and joined the PWHPA. In 2021, Roque was selected for the World Championship and the team later won a silver medal in the finals.

Who is Abby Roque Dating? Know About Her Boyfriend and Relationship Status

Abby is an active social media user. She has successfully kept her personal life away from the reach of media personalities. The twenty-four-year-old player is believed to be single as of early 2022. Her timeline is filled with photos of her games, family and friends. Roque is very close to her best friend, Easy Aaron. Abby is very early in her career and must focus on her career.

Abby Roque has an estimated net worth of more than $1 Million. She credits most of her net worth to her successful career in Ice Hockey. Abby is yet to start her professional career in the National Hockey League. Roque is early in her career and will be adding a huge net worth to her name in the coming days. Abby must be receiving a handsome amount for representing the states in numerous divisions.