Alex Abrines is a Spanish professional basketball player. Abrines currently plays for the Oklahoma City Thunder of the National Basketball Association (NBA). Abrines plays the position as the shooting guard and small forward. On 27th June 2013, Oklahoma City Thunder picked Abrines with the 32nd overall pick in the 2013 NBA draft. Abrines won a gold medal at the 2011 FIBA Europe Under-18 Championship.

Abrines has an estimated net worth of about $5 million. He is married to his wife but hasn't revealed any details about her.

Alex Abrines Net worth and Salary

Alex Abrines is a married man. Abrines is married to his long-term girlfriend. However, he hasn't revealed any identity of his wife so far. The husband and wife exchanged their vows on 11th July 2018. Abrines shared an adorable photo with his wife on his Instagram with a caption "Officially married!!!." 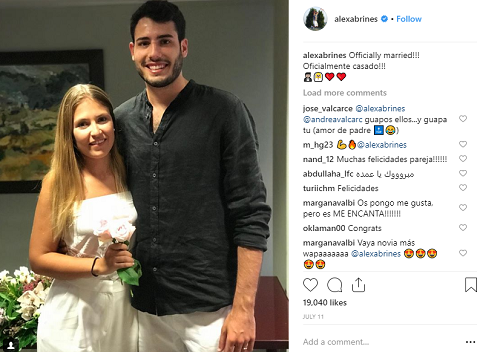 As the couple is already married, they do not have any children from their relationship. Since their wedding, the duo is still together.

So far, they haven't faced any rumors of divorce and extramarital affairs. They are successfully maintaining their relationship and Abrines frequently shares photos with his wife on Instagram and Twitter.

However, the details about his educational background are yet to be revealed.

Alex Abrines played for Clínicas Rincón and Unicaja. in between 2010 and 2012. Later, in July 2012, he was traded to Spanish club FC Barcelona. In the 2013 NBA draft, Abrines was picked by Oklahoma City Thunder with the 32nd overall pick on 27th June 2013. Abrines was named the EuroLeague Rising Star in May 2016.

Abrines played four seasons for Barcelona and won three titles with the club including one Spanish ACB league championship, one Spanish King's Cup, and one Spanish Supercup. He signed a three-year contract with Oklahoma City Thunder on 23rd July 2016.