Alan Mozo is a Mexican professional associational football player currently signed to the Liga Mx. He serves as a right-back for football club Guadalajara. Moreover, he also represented Mexico's national team at the youth and senior levels. For Mexico, he made his first appearance in 2018 as a U21 player.

2018 Liga Mx Best XI Alan Mozo has just played for two football clubs, i.e. (UNAM and Guadalaraja) in his active football career. He is known for his defensive mastery. With such talents, he has nursed his team in changing the game towards them.

Insight On His Early life and Family Background

Alan Mozo, the 2022 CONCACAF Champion League XI, is a Mexico City native born on April 5, 1997. He is the son of his supportive parents, Roman Mozo and Patricia Rodriguez. Both of them are of Mexican origin. He spent most of his childhood growing up in the Mexico City neighborhood. Besides football, Alan is also a pet lover.

Talking about his height, Alan is 5 ft 9 inches tall and weighs over 79 kg. Alan is a good-looking guy with few tattoos on his body. Additionally, the 25-year-old player prefers his right foot over his left.

Alan Mozo Rodriguez, the Mexican defender, set his football into football as a youth player for UNAM. Likewise, after three years with the team, he finally made it to its first team in 2017 and made his Liga MX debut on September 16, 2017. In his five years at UNAM, he made a total appearance of 136 games, adding one goal to his tally. 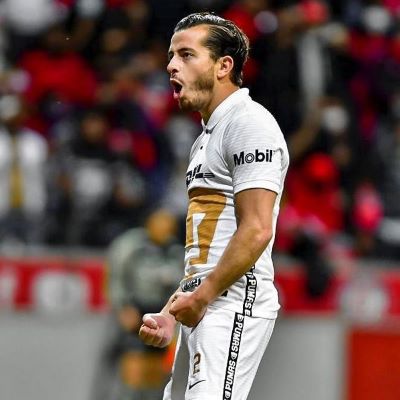 Subsequently, after his release, the footballer moved to his fellow club Guadalajara in May 2022. So far, joining the club has played in just 12 league matches.

Alan Mozo, his name itself, is pretty popular in his country. Not only that, but his soccer skills earned him a reputation, fame, and money from his profession. There is no doubt that Alan has been making his paychecks in six figures. Moreover, exploring various web pages, we found that he earned a weekly salary of £13,000 and £676,000 playing for CD Guadalajara. With fantastic payment, he ranks top six lists of the highest-paid players after Roberto Alvardo in his current club.

In addition, his income from his commercial ads and endorsement deals also aids in crediting his balance. According to the sources, his current net value is $1 Million. Further, the right-back owns a luxury mansion and an expensive car and is enjoying his best life.

Alan is currently dating his gorgeous Girlfriend, Ximena Ruiz. He is very confidential about his Girlfriend, as he has not mentioned anything about her despite sharing several photos on his Instagram handle. Both the pair semms to be fond of exploring new spots. Further, the lovebirds often tour together and are seen flourishing up their online handles with their traveling shots. Eyeing their activities online, they seem pretty serious about their relationship. Best wishes to them that, like other athletes, they ended up tying their marital knot very soon.