Sada Thioub is a France-born Senegal descent professional football player who serves as a winger for Ligue 1 club Sainte-Etienne, on loan from Angers. He also plays for the Senegal national team. Sada Thioub is one of Senegal descent players competing in Ligue 1. Sada is a player with dual citizenship eligible to represent both countries internationally.

On 1 June 1995, the former Nice winger Sada Thioub was born in Nanterre, France, with the Gemini sun sign. As of 2022,  Sada is 26 years old. He represents himself wearing jersey number 9 on his back for the club. The forward has a height of 5 ft 10 inches and weighs 65kg. The player's parents are of Senegal descent.

He practices the Muslim religion. Reportedly, he has kept his parents' and siblings' details confidential.

The forward commenced his football career with Caen. However, he is considered the youth exponent of Nice. After playing a season with the Caen B in 2012, he joined Nice, signing a two-year contract. He played 38 games for the club, and after his departure, the forward moved to Nice and made his Ligue 1 debut on 23 Jan 2015.

Similarly, he played for Guingamporm, CA Bastia (Loan) and Nimes in the time duration of 2015 to 2019. After that, he determined to sign an agreement with Angers in 2019 for three years. Sada appeared in 54 matches during his term there, counting two goals to his tally. The Senegal descent forward Presently is playing for Saint-Etienne as a loan player. Despite being born in France, he represents Senegal internationally. He is one of the vital players in Senegal's squad. He was first called up to the squad on 27 February 2019. The 5 ft 10 inches winger got to make his senior international debut on 23 March 2019.

Following his post on several social, he seems to be single at the moment. The winger seems to be a very closemouthed person. He chose not to divulge his relationship status to the public. Sada, the winger with Siant-Etienne, has never seen any girls public, so identifying whether he is dating might be quite difficult.

Regardless, observing his post on several social, he seems to be single at the moment. We will keep the tabs and update you on this very soon.

Annual earnings, salary and net worth in 2022

The Senegal winger is a well-established and respected player. His primary source of income is from football only. He has played for more than four top clubs, so we can speculate how many banknotes he makes playing for them. As per the data by Salary Sport, as a Saint-Etienne winger, he earns £5,600 weekly, which computes up to £2,92,200 per annum. As of 2022, he has a net worth of £1.71 Million. 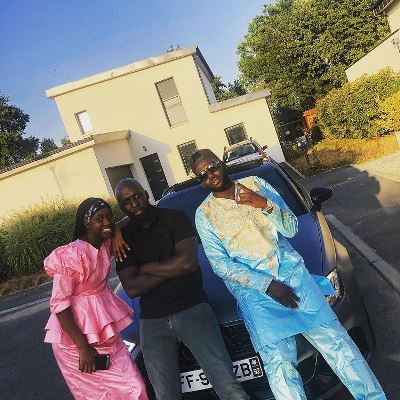 Sada and his sibling posing with his car SOURCE: Instagram

In addition to that, Saa also makes money from his sponsorship, commercial ads and branding. Nevertheless, he remains muted by the financial number he gains from it.

Read more interesting facts, news and biography of other players at Playerswiki