Adrian Wojnarowski is an American sports reporter, columnist, and author. Active since 1986, he currently works for ESPN as an NBA insider. Earlier, he prominently covered the NBA for Yahoo! Sports.

Bristol, Connecticut native, Adrian Wojnarowski was born on 4th March 1969, under the star sign Pisces. The fifty-two years old holds an American nationality and is of Polish descent. Wojnarowski completed his high school level from Bristol Central High School in 1987 and then graduated from St. Bonaventure University in 1991.

How Much Is Adrian Wojnarowski Net Worth In 2021?

It's been over three decades since Adrian Wojnarowski is active in sports journalism. Not to mention, he has earned a good deal of money but the exact figure is unknown. However, different sources have reported his net worth of $1 million as of 2021.

Currently, serving as ESPN's NBA insider his annual salary is over $100,000.

Wojnarowski owns a house in Glen Rock, New Jersey, Besides there is no information about his financial aspects.

Adrian Wojnarowski is married to the love of his life, Amy. The couple tied the knot after Adrian's graduation. Their love story began when they met at St. Bonaventure. Both were journalism majors and that's the factor that brought them together.

At the time, Amy was only a freshman, while Adrian was a sophomore working as the sports editor, due to which they spend a great deal of time. She soon discovered her future husband’s dream career. 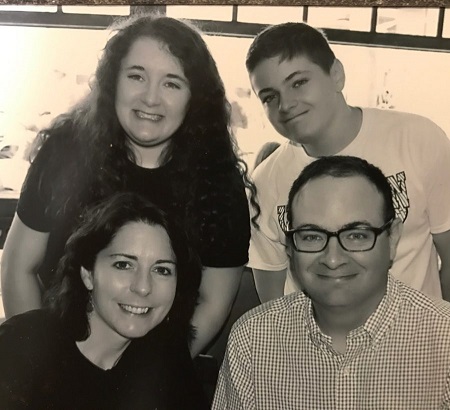 After years of marriage, they moved to Glen Rock and raising a family. Then Adrian started to undergo the process of writing The Miracle of St. Anthony. They have two children Annie and Ben.

Wojnarowski started his career while still as a high school senior, working for the Hartford Courants which he continued during breaks from college. Upon his graduation from college, he became a columnist for the Fresno Bee in 1995. Later two years, he began working for The Record in New Jersey.

In 2006, he wrote "The Miracle of St. Anthony: A Season with Coach Bob Hurley and Basketball's Most Improbable Dynasty." which was a New York Times best-seller.

In 2007, he joined Yahoo! Sports full-time. There he helped break many major national stories. He is widely considered one of the best NBA "scoopers" in the business, especially during the NBA Draft.

Nevertheless, for his reporting on NBA star, LeBron James, Wojnarowski was criticized by the media and accused of having an apparent bias and relying on anonymous sources. For this reason, he got listed #1 in Sports Media Watch's Worst of Sports Media 2010 as a result of this criticism.

On 1st July 2017, he left Yahoo! Sports and joined ESPN. On the midnight edition of SportsCenter, he made his ESPN debut earlier that day.