Adrian Healey is an English football commentator currently working for ESPN and BT Sport. Known for his appearance in MLS Game of the week, Adrian Healey was also part of the ESPN commentary team in South Africa for the 2010 World Cup. Further, he has been a fill-in host for Dan Thomas on ESPN's soccer show ESPN FC.

The resident of Connecticut, Adrian Healey, reportedly earns around $50,000 dollars, as his yearly salary from the network, and as of 2018, he reportedly has an estimated net worth of over $1.3 million dollars. He is currently married and lives in Connecticut with his wife and two children.

There is less information regarding Adrian Healey's educational background, where he studied and graduated from.

Adrian Healey began working in the USA in 1992 as a midday DJ for Boston's WFNX. He then got a TV job commentating for the New England Revolution. Later, he left the Revolution to join ESPN, where he started with play-by-play commentary with Robbie Mustoe on ESPN2's alternate broadcast of UEFA Champions League play. 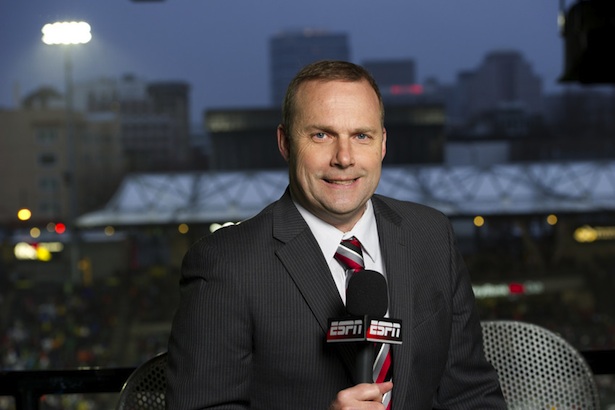 Adrian Healey also served as a play by play announcer for NBC Sports' coverage of soccer at the 2008 Summer Olympics. He was also part of the ESPN commentary team in South Africa for the 2010 World Cup. As for now, he serves as lead announcer for ESPN's coverage of Major League Soccer alongside Ian Darke, Mark Donaldson, and Max Bretos.

Adrian Healey is a married family man with a wife. However, he hasn't disclosed the name of his wife yet. The couple has a son and a daughter. They currently reside in Connecticut.

Even on Healey's Twitter page, he posts only about the football and less about his family. This shows that he is a kind of person who likes to keep secrecy about his family life and stay more focused on career.

Adrian Healey's Net worth and Salary

The British sportscaster/anchor Adrian Healey has an estimated net worth of $1.3 million dollars. As of 2018, the reporter receives an annual salary of $50,000 dollars from his successful reporting career with ESPN and BT Sport.

Other than being a famous commentator, Adrian Healey is pretty famous in social media. He has 18.6k followers on Twitter.