Adama Sanogo is a rising Malian College basketball player. He is currently playing in the Big East Conference for the University of Connecticut's Men's basketball team. Sanogo plays as a Power Forward for his team. Adama was part of the Gold Medal winning team in the FIBA U-16 African Championship in 2017.

Adama Sanogo was born on February 12, 2002, in Bamako, Mali. He is among the seven children born to Awa Traore and her husband, Cheickne Sanogo. He has five older sisters and a younger brother. Sanogo holds Malian nationality, and his family still resides in Mali. Adama graduated from The Patrick School and then enrolled at the University of Connecticut. Talking about his physical appearance, Sanogo stands six feet and nine inches tall and weighs 109 kg.

The journey from Mali to NBA

Adama played numerous sports early days. He grew up in Bamako, Mali and first played soccer before switching to basketball in 2014. The player moved to the states, started playing for Our Savior New American School, and transferred to The Patrick School. In his senior year, Adama averaged 13.3 points and 10.5 rebounds per game. After completing high school, Sanogo got a chance to play for the New York Rens on the Amateur Athletic Union. 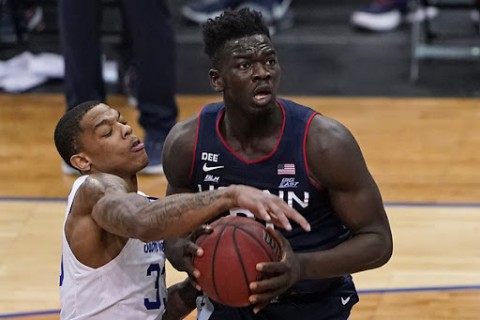 Adama tries to pass away the ball to his teammate SOURCE: New Britain Herald

Adama received numerous offers from universities but chose to play for the University of Connecticut, leaving behind the offers from Seton Hall and Nebraska. Sanogo started his third game in his freshman year and recorded a season-high 16 points, nine rebounds, and two blocks in a 69–58 win over Seton Hall. The player played in a total of twenty-three games and started in twenty games for his team.

Sanogo has represented his home country in international events. Sanogo averaged 10.5 points and eight rebounds per game while playing in the 2017 FIBA Under-16 African Championship in Mauritius. He helped the team win a gold medal in the tournament. The following year, Adama averaged six points and seven rebounds per game in the 2018 FIBA U-17 World Cup.

Adama is very much private about his personal life. He has not shared a word about his love life in public. Sanogo does not show much presence on social media, and there has been no rumor of him dating anyone to date. The player is very early and must focus on his career rather than spending time with people.

Adama Sanogo has an estimated net worth of more than $50,000. He is very much early in his amateur career and is yet to start his professional career. Adama is among the top-rated player on the team. Sanogo is not receiving a penny for representing the university's athletic team but rather is offered scholarships. The salary of an NBA rookie player ranges from $10 Million to more than $500,000.