Previously he played for Al-Qadisiyah and Al-Shabab. He made a quite impressive sum from his professional career. To know about his career, net worth, personal life and more, take a look until the end.

Abdulmalek Al-Khaibri was born on 13th March 1986, in Riyadh, Saudi Arabia. Regarding his nationality, he is a Saudi Arabian. Besides this, there is not much information about his educational background and parents.

Back in 2017, Al-Khaibri's market value was estimated to be around £495K. Currently, his market value is calculated at £225K as of 1st June 2018. He has an estimated net worth of thousands of dollars.

Al-Khaibri earns €24K as an annual salary from his current club. As of June 2018, his release clause is estimated at €2.7 million. According to Sofifa, he has a value of  €1.6 million as of 2018. He has been living his personal life by not revealing to the media

. There are no any details about his net worth, but it is a fact that he is living a luxurious life.

Abdulmalek Al-Khaibri began as a youth player of the Al-Qadisiyah. He played for around four-years with the youth academy. After being promoted from the youth club, he debuted professionally from the same in 2007. Before leaving the club in 2008, he played only three games.

Al-Khaibri was discovered by AL-Shabab and signed him on 1st July 2008 on a free transfer. Later, he left the cub in 2016 after the board failed to renew his deal. Before ending his career, he played 104 games netting only two goals.

Abdulmalek Al-Khaibri is currently playing for Al-Hilal since 2016. He moved to the club on 1st July 2016, on a free transfer.

Along with his team, he has been honored with Saudi Professional League 2016-017 and 2017 Kings Cup during his first season. He has so far played 21 games and went scoreless.

Abdulmalek Al-Khaibri earned his first international cap with the coach Bert van Marwijk on 1st September 2015. He has been capped 36 times for his national side since 2011. He was included in a 0-3 loss against Peru on 3rd June 2018. Moreover, he participated in a 1-2 loss against Italy on May 29, 2018. 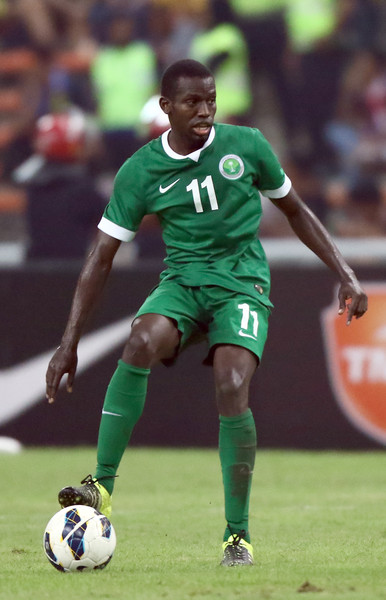 With his abilities and physical powers, he was named in the FIFA World Cup 2018 in Russia along with Motaz Hawsawi, Salman Al-Faraz, Muhannad Assiri, and Mohammad Al-Sahlawi. He scored a goal against Egypt during the group stage of 2018 FIFA World Cup.

Abdulmalek Al-Khaibri stands at the height of 1.75m, i.e., 5 feet 7 inches and weighs around 72 kg. His age is 32. He seems to be married, but he hasn’t revealed anything regarding the information about his personal life in front of media.

Al-Khaibri keeps his personal life secretly away from the limelight. Furthermore, he is even inactive on social networking sites.