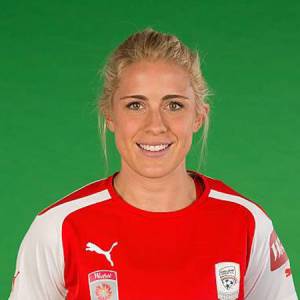 Currently 25, Abby Dahlkemper is dating her boyfriend, Max Kepler. Furthermore, she has an estimated net worth of $0.5 million.

Abby Dahlkemper has a fancy car but she hasn't revealed regarding what type of car it is. Besides, she is a pet lover and often posts snaps with her white dog on Instagram.

So far, Dahlkemper has n’t any product endorsement. With a tremendous amount of money, she lives a lavish and luxurious life with her family in the United States.

Currently, Dahlkemper is in a relationship with her boyfriend, Max Kepler, a German professional baseball outfielder for the Minnesota Twins of Major League Baseball. The couple was seen enjoying their vacations in different places. She often posts snaps with her boyfriend on Instagram.

Till this date, there are no news or rumors of their separation. Dahlkemper has managed time for her boyfriend from her busy schedule. She loves traveling and is often seen in the world's expensive destination. As revealed by her, she was single until 2012.

Abby Dahlkemper was born on May 13, 1993, in Lancaster, Pennsylvania as Abigail “Abby” Lynn Dahlkemper. He was born to Susan and Andrew Dahlkemper and grew up along with her siblings, Andrew, and Joe in Menlo Park, California. She belongs to white ethnicity and holds an American nationality.

Abby Dahlkemper enrolled at Sacred Heart Preparatory School where she was a member of the soccer team.

Abby Dahlkemper began her career with the youth team of MVLA Avalanche in 2005. She left the club after spending around five years and then played for Sacred Heart Preparatory for about three years.

Dahlkemper was then transferred to college team of UCLA Bruins in 2011. She scored 5 goals in 93 matches for the club before ending her career with the club.

Abby Dahlkemper began her professional career after being signed by an American women’s soccer team, Pali Blues in 2013. He is the member of the team that won the Western conference award and the National Championship in July 2013.

Dahlkemper then transferred to Western New York Flash in 2015, March before playing a couple of month for LA Blues. She made her official debut for the club, WNYF in April.

Dahlkemper was sent on loan to Adelaide United for the 2015-2016 season in Australian W-League. She scored 5 goals in 12 appearances before ending her loan contract.

Recently, she signed a new deal with North Carolina Courage in 2017. As a soccer player, she has been honored with Gatorade California Girls Soccer Player of the Year (2010), and Honda Sports Award (2014) etc.

Till this date, Dahlkemper has capped in 13 matches for her national team since 2016.