Some people come to the spotlight after their hard work pays off, and some rise to fame after their relationship status with reputed ones. Abbey Gile followed a similar path to her spotlight. Abbey is best known for her relationship with American football quarterback for the New York Jets, Zachary Kapono Wilson Aka Zach Wilson.

Abbey Gile was born on June 2, 2000, in Utah. Abbey is among the five children born to Nichole Gile and her husband Dennis P Gile. Abbey has an older brother named Parker Gole and Kesley Gile. After graduating from Brighton High School, Abbey enrolled at Utah Valley University. Talking about her physical appearance, Gile stands five feet and eight inches tall and weighs 54 kg.

Abbey and Zach started dating each other from their High School days. Both of them are active social media users and keep sharing each other's photos regularly. The duo seems to be very much supportive of each other. 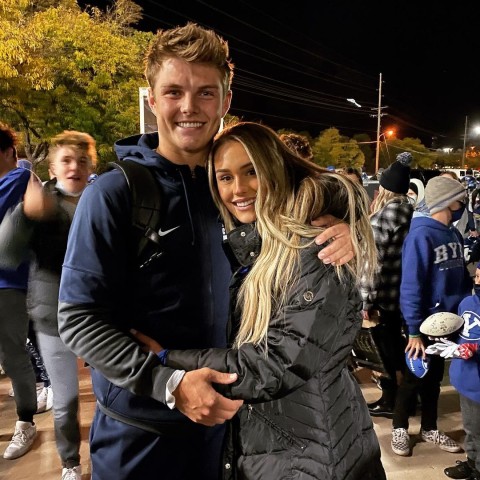 CAPTION: Abbey along with her boyfriend, Zach, at an event SOURCE: [email protected] Wilson

How Rich is Abbey Gile? Know About Her Net Worth, Earnings, and Contract

Abbey Gile is very much early in her career. She is currently studying in her undergraduate. Abbey will be making a huge net worth in the days to come. As of now, Gile is spending a lavish and luxurious life through her parent's successful career and her boyfriend's NFL draft.

Abbey's Boyfriend, Zach Wilson, has an estimated net worth of more than $5 Million. Zach is set to sign a 4-year, $35.1 million contract that is fully guaranteed. As per sources, He will receive a $22.9 million signing bonus. Wilson’s contract will count for about $6.4 million against the Jets 2021 cap.

Much about her career is not shared with the public. As per sources, Abbey is an accomplished dancer, with her troupe winning first place in a February 2019 contest.

Abbey's boyfriend, Zach, played High School Football for Corner Canyon High School. He finished his High School career and 2,986 yards and 24 touchdowns while rising for 752 yards and eight touchdowns as a senior. The player committed to play for the Boise State University but later changed to Brigham Young University.

As a freshman, Zach played in nine games and made seven starts. He completed the season with 120 of 182 passes for 1,578 yards with 12 touchdowns and three interceptions. At the end of the season, Wilson was named MVP of the 2018 Famous Idaho Potato Bowl. Coming into the sophomore year, The player completed the season 199 of 319 passes for 2,382 yards, 11 touchdowns, and nine interceptions.