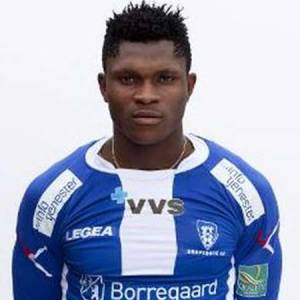 Aaron Samuel Olanare is of Nigerian nationality having African ethnic background. He was born on 4 June 1994 in Port Harcourt, Nigeria. He was interested in playing football since his early childhood days.

His current annual salary is around € 1.1 million with a weekly salary in excess of € 23000 which he receives from playing for Russian professional football club, FC Amkar Perm.

Aaron Samuel Olanare's net worth combined with assets, salary and endorsement could be well over $1 million.

He has amassed great wealth while playing for various football clubs throughout the world and has been known as a lover of cars. He currently rides Mercedes-Benz G-Class bought in 2016. He has also bought a Porche and owns other including Range Rover.

The Nigerian striker began his senior playing career with Nigerian football club, Shooting Stars during 2010/11 season and after a handful of appearances for Dolphins FC, he signed with Norwegian football club, Valerenga in 2012. He later joined fellow Norwegian side, Sarpsborg in on July 2013.

Aaron was then transferred with a two and a half year contract deal to Chinese football club, Guangzhou R&F in early July 2014 for a transfer fee of €1.4 million.

He made his CSL debut for Guangzhou against Jiangsu Sainty on 19 July 2014 and scored his first goal against Liaoning Whowin on 31 July 2014.

The Nigerian international was signed as a loan from the Chinese club to Russian Premier League club, CSKA Moscow on 17 February 2016 for 2016 season. After impressing the authorities at the Russian League, he signed a permanent deal with Moscow with a four and a half year contract deal on 28 January 2017.

After having represented Nigeria in their U-20 levels, he made his senior debut for the national Nigerian side as a substitute for  Nosa Igiebor on 11 October 2014 against Sudan in a friendly match.

He scored his first international goal for Nigeria against Sudan on 15 October 2014 and has been recently called up alongside with fellow Nigerian striker, Issac Success, and goalkeeper, Dele Ajiboye in the last twelve months for Nigeria.

Aaron Samuel Olanare stands at the height of 6 feet 2 inches and weighs about 88 kg. He is happily married to his wife and blessed with two children. His wife gave birth to their first child, a daughter in May 2015. The couple got married in Onitsha, Nigeria in July 2017.

They recently had their second child, a son named LeBron born on January 24, 2018.

Previously, the Nigerian striker was in a relationship with Queen Layefa who is a writer, an entrepreneur and an IT specialist. The two began dating soon after they met in Norway.