Zaza Pachulia is a Georgian professional basketball player who plays in the National Basketball Association (NBA). As of 2019, Zaza Pachulia currently plays for the Detroit Pistons as their Center. Zaza Pachulia has played for other teams like Ulkerspor, Orlando Magic, Milwaukee Bucks, Atlanta Hawks, Galatasaray, Dallas Mavericks, Golden State Warriors.

Playing as a Center, Zaza Pachulia reportedly earns around $2,393,887 as his yearly salary from Detroit Pistons and has an estimated net worth of over $25 million. He is currently married to his girlfriend Tika Pachulia since 2008.

How much are Zaza Pachulia Salary and Net Worth in 2019?

Zaza is also the 12th best-paid player of Detroit Piston of 2018. Kept aside Zaza Pachulia financial earnings, his personal assets includes home and cars. In addition to this, he owns a restaurant called Buckhead Bottle Bar which serves French-style bistro in Atlanta.

The Famous NBA star Pachulia is 6 feet 11 inches tall in height and weighs around 122 kg. Pachulia is not only a world-class athlete but also a very attractive individual.

Zaza married Tika Pachulia in 2008 after a long romantic relationship. Tika also called Tina is one of the very active NBA wags. She was born on December 30, 1987, in Tbilisi, Georgia.

The couple has two sons Davit and Saba, and a daughter Mariam. Until 2016, when Zaza established a basketball academy in his native Tbilisi, he hosted annual free summer basketball camps for children in different locations in Georgia.

In 2017, Pachulia received the Order of Honor from President Giorgi Margvelashvili of the Republic of Georgia. He also has Turkish nationality.

Other than being a famous NBA Center, Zaza Pachulia is pretty famous in social media. He has 144k followers on Twitter and 296k followers on his Instagram account.

Zaza Pachulia was born on February 10, 1984, in Tbilisi, Georgian SSR, the Soviet Union to parents David Pachulia and Marina Pachulia. As per his nationality, he is Georgian and belongs to the White ethnic group. Further, his star sign is Aquarius. Details regarding Zaza's education were not found.

He started playing basketball in Georgia at an early age. At the age of 13, Pachulia was about 6 feet 8 inches (2.03 meters). He was searched and recruited when he was a teenager by the Turkish team of professionals ülkerspor.

At a young age, Pachulia became a member of the Georgian junior national basketball team and led them in different tournaments.

After distinguishing himself with ülkerspor, Pachulia was drawn up by Orlando Magic in the second round during the NBA draft of 2003. After being selected by the Charlotte Bobcats in the 2004 expansion draft, he was traded to the Milwaukee Bucks where he played the 2004–05 season.

Zaza was traded to the Dallas Mavericks on 9 July 2015 in return for a future second-round pick. Later that month, Kawhi Leonard received 14,227 votes to knock out San Antonio Spurs for the start of the 2016 NBA All-Star Game in the West All-Star Team. He recorded his 20th double of the season and his 100th career with 14 points and 12 rebounds in an overtime loss of 110–107 to the Cleveland Cavaliers on 12 January 2016.

Pachulia signed with the Golden State Warriors on 12 July 2016. Zaza played the best of the season with 15 points and 14 rebounds in a 117-101 win over the Brooklyn Nets on 22 December 2016. He again caused controversy in a game against the Thunder on 25 February 2018, when he fell on the knee of Russell Westbrook after a game. 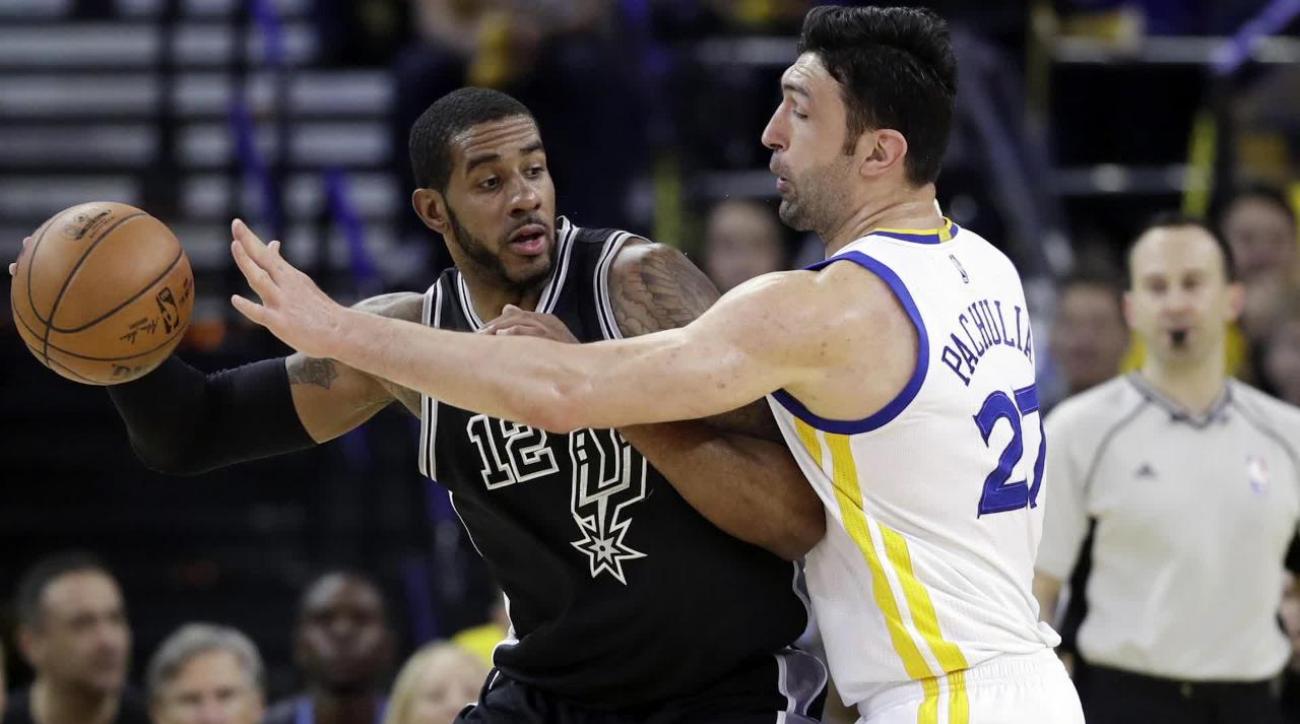 In an interview after the game, Westbrook stated that he believed that the fall of Pachulia was intentional in order to injure his knee. Teammate Kevin Durant later defended Pachulia saying that in the incident he had got his feet tangled with Nick Young, but Pachulia was criticized by many players, coaches and experts like Paul George, Kyrie Irving, Gregg Popovich. He signed with the Detroit Pistons On July 15, 2018.

Facts and stats of Zaza Pachulia