Yuto Nagatomo is a Japanese professional footballer, widely perceived for playing with the Turkish club Galatasaray as a defender. Earlier, he played for the FC Tokyo, Cesena, and Internazionale.

Yuto Nagatomo is a married man. He married his long-term dated girlfriend, Aliri Taira who is a Japanese actress. The husband and wife are blessed with a child.

Yuto Nogatomo was born on September 12, 1986, in Saijo, Ehime, in a Japanese family which includes his mother, Rie Nagatomo, and a brother, Minoru Nagatomo. Regarding his nationality, he is Japanese and of Asian descent.

Yuto Nagatomo's first professional football career began in 2008 with the Japanese Football club, FC Tokyo where he designated himself as a Youth Player. He played with the FC Tokyo team for almost four years and throughout that time he made 84 appearances.

Afterward, he joined Team Cesena in 2010. However, in the same year, he switched the club to Internazionale also known as Inter Milan outside Italy being one of the first East Asian players to sign with Internazionale. He played with the team for almost seven seasons.

More recently, he signed with Turkish club Galatasaray on Loan for the remainder of the 2017-18 season. Moreover, he played in the 2018 FIFA world cup along with Shinji Kagawa, Gen Shoji, Gotoku Sakai, Yuya Osaka, and so on. In two seasons with Galatasaray in the Turkish League, Yuto appeared in thirty-two games. He moved to Marseille in the French League for a season on a free transfer. After the season, The player moved to Japan and signed with FC Tokyo.

Yuto has represented his national team in numerous divisions and is among the highest-capped player for his senior team. He made his international team debut in 2008 for the Japan U23 team. The Player appeared in two games and earned his senior team call.

Yuto has since then appeared in 136 games and scored four goals. He played in three consecutive World Cups in 2010,2014 and 2018. He was part of both the squad that won the Asian Cup in 2011 and the one that finished as runners-up in the same competition in 2019. The player is a possible player for the upcoming 2022 Qatar World Cup.

Yuto Nagatomo married a Japanese actress, Aliri Taira in 2017.  They dated each other for several years before their marriage.  Nagatomo proposed Taira on the San Siro pitch in February 2016. Now, the husband and wife are blessed with a child whose name is still unknown in the media. 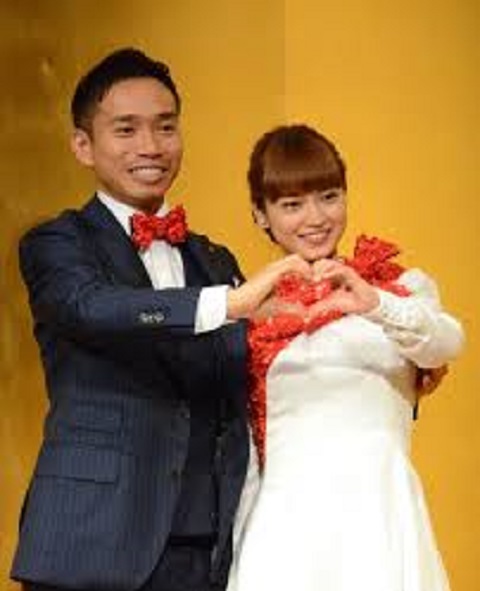 Though the pair has just celebrated a year of their marriage, they have a long dating history. The lovely couple looks perfect together and has maintained their relationship very strong.

They live happily with no rumors or news of external marital affairs and divorce. Besides, they support each other in their professional career as well as in their daily activities.

Yuto Nagatomo makes nice measures of cash from his football professions. In 2016, He earned a salary of €1.5 million from the football club Internazionale. Currently, his market value is around €4.1Million. His current salary that he received from Galatasaray in 2018 was expected to be more than €1 million.

As of 2022, the exact figures of this talented Japanese footballer, Yuto Nagatomo's net worth is under review. He might have summoned his net worth in thousands of dollars which is bound to have a substantial growth in the coming days.