Yousef Hassan Mohammed Ali, aka Yousef Hassan, is a Qatari professional soccer player who plays for Al-Gharafa as a goalkeeper. The Doha Qatar native Hassan also serves the Qatar national football team. Before Qatar's senior squad, Hassan initially played for the Qatar U20 group in 2014. He is one of the future-worthy players of the team Qatar. Indeed, he is also the 2019 AFC Asian Cup Gold medalist.

The Goalie Hassan kicked off his football journey at the age of 13 when he joined the Aspire Academy in Qatar. To date, Yousef Hassan has been present for several clubs football teams such as Villareal, Al-Gharafa and Eupen in Spain, Belgium and Qatar. His mastery in goalkeeping has made in one of the popular faces in Qatar football.

Have a look at Hassan's body measurements (heights  and weight)

Yousef Hassan Mohammed Ali is the goalie with an impressive height of 6 ft 1 inch or 186cm and weighs around 78kg., He is mindful of his bodily form, so he regularly workout to preserve his healthy body. His height reach advantage also played an important role in his goalkeeping technique. Further description, Hassan's skin type is wheatish, and he has black eyes. His face is covered up with a trimmed beard.

The gifted goalkeeper Yousef's birth occurred in 1996 in Doha, Qatar. He celebrates his birthday bash every 24th May of year. Talking about his age, Hassan is 26 years old. His zodiac sign is Gemini. He is of Qatari nationality and was raised in Doha. Additionally, he follows the Muslim religion and its norms and ideology. There is nothing much about his personal and early life as of writing this.

Likewise, the former Villareal youth player appears to be a very introverted character when it comes to his family topic. As a result, the information regarding his family background and siblings remains a mystery. Nevertheless, he forever has his family's support behind the public watch as everyone needs it.

The Al-Gharafa star, 26, Hassan's football journey started in his home country after joining Aspire football academy in 2009. He has an emotional attachment to the academy as it's his first team as well as he spent three years of his youth career there. In 2012, the academy made sure to send him on loan to the Spanish side of the Villareal youth system. There were drastic changes in his games and technique after joining the club. The Qatar international played for two years for the team as an amateur player. 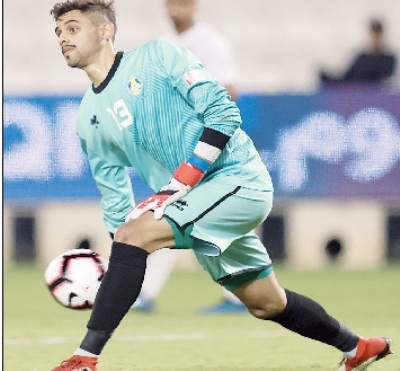 Hassan is representing Al-Gharafa in the 2019-19 season SOURCE: Twitter

After he departed from the Spanish side, the professional set his foot into his senior career, joining Al-Gharafa of the Qatar Stars League for the 2015-16 season. Later in January 2015, Hassan was loaned to a Belgian first Division club Eupen during the winter transfer window. Similarly, after completing his deal, Hassan again moved back to his former club Al-Gharafa. To your knowledge, with AL-Gharafa, he also clinched FIFA Arab Cup 2019 bronze medal and AFC Asian Cup 2019 gold medal.

Additionally, the ex-Eupen player has fulfilled his national obligation since 2014. He originally represented his nation at the U20 level. Since then, he has been portraying Qatar at various international groups. Correspondingly, he was the first time called for the senior squad in 2018. As of now, he has played 21 games for his nation so far. Not only that, he even contributed to his country for the FIFA World Cup 2022. He is all prepared to play his first FIFA World Cup.

Net worth, annual payment and market value of Yousef Hassan

Yousef Hassan Mohamed Ali has been making huge fortunes playing from the top clubs. As of the current year, he has an approx net worth of around $3 million, including all his cars, house and properties. It has been more than a decade since Yousef has been involved in this field. Thus, we can imagine the riches he brings into his bank balance from his career. However, the club has not revealed the wage he receives, so it stays under the radar. But on average, Qatari football receives $88,000 per season. Apart from that, he acquires some wealth in collaboration with the brands and endorsement deals as well. Reportedly, a Doha-born boy's current market worth equals €150k as per the transfermarkt, and his carrer highest was €175k back in May 2019.

Yousef, a private person, prefers to keep his mouth shut regarding his love life. He also seems inactive on social media accounts, which has made has particularly challenged in specifying his love life at the moment. He has kept his life very suspenseful. Instead, he appears to be fully involved in his career rather than wasting time on other things. We will keep the tabs and update you on this when it's available.

To know more details on your favorite athlete's bio, net worth and gossip, explore Playerswiki.