Yorgan De Castro is an African-American Mixed Martial Arts (MMA) fighter who is currently signed to the Ultimate Fighting Championship (UFC) under the heavyweight division. A professional since 2017, he previously competed at CES MMA and NEF. Currently, he is ranked #40 in the Best MMM Heavyweight Fighter worldwide.

Cape Verde native, Yorgan De Castro was born on 20th December 1987, under the star sign Sagittarius. The thirty-two years old holds a dual nationality: African-American and is of African ethnicity. Regarding his physique, Castro stands 6'0" (183cm) tall and weighs 262.0 lbs.

Yorgan De Castro has a handful of pro fightings compiling a record of 6-1-0 (Win-loss-draw). Since 2019, he is signed to the UFC.

Moreover, the fighter is sponsored by Plant Eats, Ultimate Potential CBD, and Alphabolix. As of 2020, his net worth is approximately $0.1 million.

Yorgan De Castro is a married man. He tied the knot with his girlfriend, Carla, a long time ago in an intimate ceremony. Matter of fact, the heavyweight is yet to come out with his love story. But he seems to be a private person. 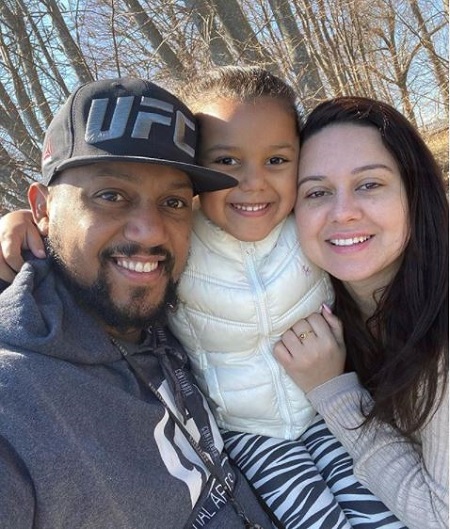 Yorgan and his wife share a beautiful daughter, Kyara, born in 2015. Before the pandemic hit, De Castro would drop off the 5-year-old at school. Then he would head to his day job as a security officer at B.M.C. Durfee High School.

Born and raised in Cape Verde, De Castro's childhood was pretty rough. He was raised by a single mother along with three other kids. At the age of 18, he left Cape Verde in search of a better life, traveling to Portugal where he would come across the sport that would change his life for the better: kickboxing.

After living in Portugal for several years and continuing to hone his kickboxing craft, de Castro eventually emigrated to the United States. Ultimately, De Castro settled down in Fall River, Massachusetts, at the behest of his family.his mother and two brothers.

On 5th October 2019, Yorgan De Castro made his UFC debut at UFC 243 - Whittaker vs. Adesanya against Justin Tafa. He won the fight via KO in round one. However, he lost to Greg Hardy in his second fight at UFC 249 - Ferguson vs. Gaethje. As of now, he is expected to face Carlos Felipe at UFC ON ESPN 16 on 3rd October 2020.