Compiling a pro record of 8-1-0 (win-loss-draw), Carlos Felipe has earned a decent sum of money through his MMA career. Currently, he is signed to UFC. On his debut fight at uFC Fight Night 172 - Figueiredo vs. Benavidez, he pursed $10,000 to show and $3,500 fight week incentive pay.

Before signing to UFC, he extensively competed in his country Brazil. According to the source, the MMA fighter in Brazil makes between $17,000 and $23,000, figures.

As of 2020, Carlos Felipe's net worth is under review.

Who is Felipe's Girlfriend?

Carlos Felipe is in a relationship with his girlfriend, Izabella Costa. After dating for a long-time, the fighter knelt down a one knees asking Costa to be his wife, on 13th September 2020. Soon, he shared some glimpse of their engagement on his IG. 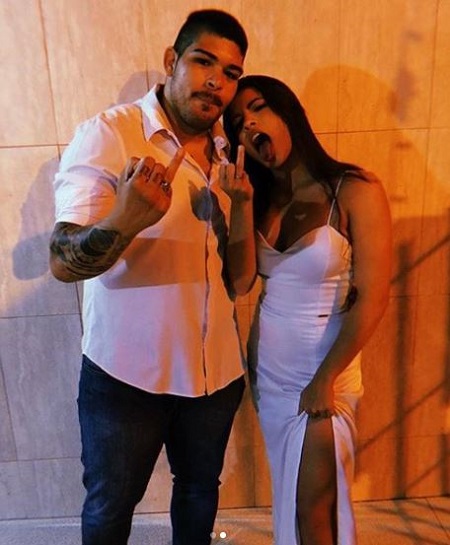 On the other side, Carlos's fiancee is a private person. Also, she has set her Instagram private.

When Carlos was younger, he had morbid obesity. Weighed 160 kilos at the age of 15, he was a victim of bullying. However, he was always very tough. One of his teachers asked him to go to a psychologist where he was suggested to join boxing.

As he had this history of making a mess, his mother was afraid to put him in. But it turned out to be the opposite, he became more relaxed and took a liking to the sport.

On 1st April 2017, Carlos faced Paulo Cesar Almeida at Fight On MMA - Fight On 4. He won the fight via TKO punches. At Qualify Combat 2 - In Search of Glory, he defeated Francisco Sandro da Silva Bezerrz on 20th May 2017.