Multi-billionaire businessman and the current American Ambassador for The Unite Kingdom Woody Johnson has faced a huge backlash from the British media following his sexist and racist comments passed along with his actions to force a prestigious golf tournament to be held at president's personal golf court in Scottland.

Though left-wingers are calling it propaganda, right-wing along with CNN is investigating it strongly. So, let's get dig the details about the New York Jets owner's life his businesses, along with his personal life, and also touch down on his political views, beginning with his net worth.

Woody Johnson is a Billionaire; Earnings and Properties

Usually, people know Woody Johnson as a businessman, rather than for his political achievements. He is at first a part-owner of a famous multi-billion dollar company Johnson & Johnson because he is the He is a great-grandson of Robert Wood Johnson I. His family's combined net worth is currently at $35 million.

Woody Johnson's personal net worth is around $3.5 billion, as of 2020. He earned such a huge wealth as a successful businessman. Kept aside his family business, he owns a famous NFL team The New York Jets and also owns courtside seats of New York Knicks, which he bought outbidding the $612 million offered by the MSG's owner Charles Dolan. As per many, he bought the seats bidding an extra $100 million for the seats. His earnings aren't limited to NFL and Johnson & Johnson, he has ventured into real estate, telecommunication, and show biz.

His team The New York Zets is marked at $2.85 billion which means he owns one half of the 2.85 billion worth company's ownership along with his brother. Similarly, he also funds the National Institutes of Health for its research work against lupus and juvenile diabetes. Moreover, he also has a huge contribution to various fundraising events for the Republican National Committee and he supported then, president-elect Donald Trump in 2016 campaigns as well.

Likewise, Woody also owns luxurious homes in Bedminster Township, New Jersey, and Manhattan, and New York City. However, he reportedly lost over $45 to $50 million in a divorce case against his former wife Nancy Sale Johnson. As per the sources, he also paid over $250 thousand in child support for his three children from Nancy's side.

Back in 2006, he was also caught in a tax-avoidance case the Senate report reads that Mr. Johnson, along with the members of an investment company registered as Johnson Company, Inc, showed a $2 billion in capital losses wiping out the profit they made from stock sales. As a result, Johnson had to settle a $300 million-plus interest to settle his tax fraud case.

Many British media outlets along with CNN reported that Ambassador Johnson tried hosting an all-men get together against the American Embassy's rules and also used racial slurs. As per the reports and news swelling in the media, once, he even claimed that there was no need of a black history month.

Likewise, he allegedly forced English authorities to host a prestigious golf tournament in President Trump's personal property in Scottland. Not only that but the alligations also claims that he reportedly tried pushing Donald Trump's personal business ahead, rather than working on strengthening the diplomatic relationship between U.S. and the U.K. As per reports published in New York Times, in mid-July 2020,  he pushed the British Open to be held at Turnberry Golf Resort in Scotland, which in all sense was an effort to push President's personal business. 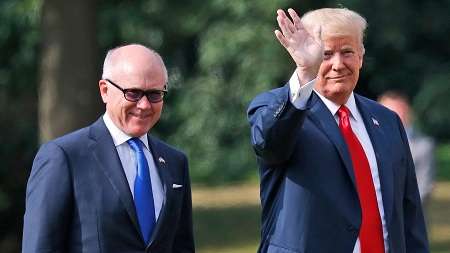 Not only that, but he was also investigated by the State Department watchdog after whistles were blown his way. While talking to the CNN news, he neither accepted, nor denied the allegations but took his air time to congratulate the great team he worked with, while working as an ambassador.

In his air time, he said:

"I greatly value the extraordinary work that each and every member of the team does to strengthen and deepen our vital alliance."

I have followed the ethical rules and requirements of my office at all times. These false claims of insensitive remarks about race and gender are totally inconsistent with my longstanding record and values.

"I have followed the ethical rules and requirements of my office at all times. These false claims of insensitive remarks about race and gender are totally inconsistent with my longstanding record and values."

What's The New York Jets' reaction over the allegations?

CNN, a channel that tried to expose Woody Johnson surprisingly enough was the one to issue The New York Jets press release as well. The release from Jets reads:

“We are aware of allegations against Ambassador Johnson, but we agree with the statement he released today denying all allegations. Which follows the tweet from Mr. Johnson.

In Jets' personal press release published in CNN.com and The New York Times, they openly outed:

“Since the Johnson family became owners of the New York Jets, the organization has consistently and actively supported, engaged, and encouraged the development of different social justice, diversity, women’s, and inclusion initiatives.

"These initiatives have been implemented internally and in our community. One of our fundamental principles is treating employees, players, coaches, and fans with respect and dignity, regardless of their race, color, religion, or gender. These principles have been established by the Johnson family, which Woody implemented in our organization over the past 20 years.”

The statement above released by the NBC.com's column clearly shows that Jets aren't ready to accept that their owner did, or said anything that would affect the lives of a certain community.

So far, Johnson's family has kept themselves away from the whole issue and even his partner, sibling brother and co-owner of Jets' Mr. Christopher Wold Johnson has kept himself away from this buzz.

Woodley Johnson as the Ambassador to England

On January 19, 2017, President-elect Donald Trump revealed that he had agreed to appoint Johnson as United States Ambassador to the United Kingdom. 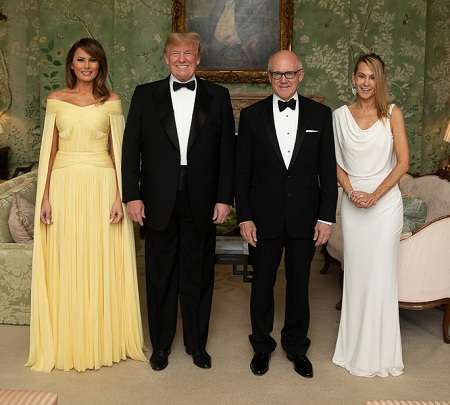 Trump nominated Johnson for the role on June 22, 2017, and was hired officially on 20 July 2017. He took his oath and was sworn by Vice President Mike Pence on August 21, 2017. On 8 November 2017, Johnson presented his credentials to Queen Elizabeth II, who was formally appointed Ambassador.

American businessman Johnson was born in New Brunswick, New Jersey, on April 12, 1947. He is the son of Mr. Robert Wood Johnson III and Betty (Wold). His late father also worked as the chairman of Johnson & Johnson for four years.

Johnson grew up with four siblings, Keith Johnson, Billy Johnson, Elizabeth "Libet" Johnson, and Christopher Wold Johnson, in affluent northern New Jersey, and attended the Millbrook Academy. He graduated from Arizona University. Johnson then worked at Johnson & Johnson in the summer months, hoping to be at the top of the family business.

Johnson has been married twice in his life and has fathered five children as well. He was first married to a fashion model Nancy Sale Johnson, back in 1977. Together, they parented three children before divorcing in 2001. After his first divorce, his children's custody was given to his first wife. In early 2010, his daughter with Nancy; Casey Johnson died of diabetic ketoacidosis which is one of the reasons he makes huge donations to the National Institutes of Health for its research works.

Moving on, in 2009, Johnson married Suzanne Ircha Johnson, a former actress and equities managing director at Sandler O'Neill & Partners. Now, they have two children together.