Gossip Who is Emiliano Martinez Married To? Know About His Married Life, Children and His Journey To 2022 FIFA World Cup Winning Team

Who is Emiliano Martinez Married To? Know About His Married Life, Children and His Journey To 2022 FIFA World Cup Winning Team

The Argentine goalkeeper, Dibu, warmed everyone's hearts in a cold December in his interview after winning the coveted world cup. With teary eyes, Emiliano Martinez thanked his family and fans for their support in the 2022 FIFA World Cup. And as for the question of Martinez's love life, yes, Emiliano is a married man. Similarly, the goalie and his wife welcomed two kids in their married life.

Martinez started his football journey in early 2008. At the time, he played for the Argentine club Independiente. Soon, in 2010, Emiliano left Independiente to join Arsenal. However, he was loaned to various other clubs for most of his career at Arsenal FC. And by late 2020, Martinez joined Aston Villa with a deal worth 20 million pounds.

Emiliano Martinez caught the heart of his childhood sweetheart, and they later married!

In recent years, Emiliano Martinez and his soccer career skyrocketed. In 2022 alone, Martinez saw his team win the Copa America and the FIFA World Cup. But before taking any major victory, Martinez had won the affection of his childhood crush. Martinez and his wife first met in their childhood days. One thing led to another, and the duo's relationship bloomed. After years of courtship, Emiliano asked his long-time girlfriend to marry him. On an auspicious day in 2017, the Argentine goalie tied the knot with his wife Amanda "Mandinha" Martinez née Gama.

At the time, Martinez was a rising footballer, and as such, he did have some spotlight on him. However, Emiliano kept the ceremony small and intimate because he enjoyed his personal space. So, the exact date of his wedding with his spouse remains hidden from the fans.

Not only did Dibu keep his marriage away from his fans, but Emiliano also liked his ex-girlfriends away from the limelight. And as a tall and handsome man, the list of ex-lovers could be long. However, Martinez prefers to keep his past relationships away from the spotlight.

Dibu and his wife, Amanda, welcomed two kids after their marriage!

Emiliano Martinez and Amanda Gama Martinez share a long relationship before becoming husband and wife. And after years of back and forth, the footballer and his girlfriend finally tied the knot. Afterward, the Martinez couple welcomed two children as a married couple. The Argentine goalkeeper and his wife, Amanda, welcomed a son and a daughter. Emiliano and his partner first gave birth to their son, Santi Martinez, in June 2018. And a couple of years later, Martinez and his bride welcomed their daughter Eva Martinez.

Emiliano Martinez started playing football as a kid but was later signed by Independiente in his teens!

Argentina is the place where many great soccer players were born, like the great Maradona, Passarella, and now Messi. Even Emiliano Martinez falls under the list of great players from Argentina. And this all became possible because Lionel Messi, Emiliano, and the Argentine squad bagged the 2022 FIFA World Cup; dreams do come true. 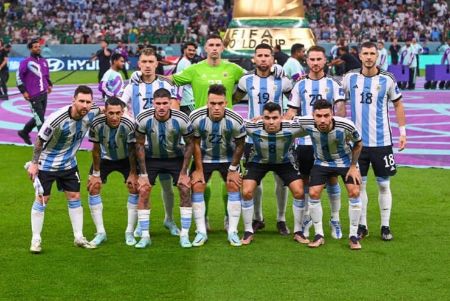 Emiliano Martinez and the Argentine Squad took a picture in the early stages of the 2022 FIFA World Cup. SOURCE: [email protected]_martinez26

As of 2022, Martinez became a household name for soccer fans. However, just a few years prior, Emiliano stayed away from the limelight. And the talented footballer started his youth career in his teens, while most soccer players begin their careers way earlier. In 2009, the Argentine goalkeeper found his starting point in the Independiente FC.

Despite earning a spot at Arsenal FC, Emiliano Martinez mainly played as a loaned player. In his initial year in the English football club, Martinez went on an emergency loan to Oxford United.

In the following years, Martinez went on to play for various other clubs. However, as an Arsenal player, he'd only wear their jersey for fifteen games in eight years. And later, his big came while playing for Reading FC, resulting in him finally moving from the English club.

Martinez joined the senior Argentine Squad in 2021! And the 2022 FIFA Final Penalty Saves!

Despite his move from one club to another, Emiliano Martinez found his skillset growing. And so, by June 2021, Martinez joined the Argentine senior squad. He first made his debut representing Argentina in the 2022 FIFA World Cup qualifying match. Outside of FIFA, Martinez was also responsible for the Argentine team winning the Copa America in 2022. Dibu saved three penalty shots against Colombia in the Copa Semi-finals, making it possible for Argentina to make it to the finals.

Undoubtedly Martinez became one of the key players in the 2022 FIFA finals. Messi's final FIFA game would have ended with his uncompleted dream if Emiliano had not saved multiple goals from the French squad. However, later during the award ceremony, Dibu's celebration drew many eyes with various reactions from the world.

Martinez and his "Lewd" celebration in the FIFA Award Ceremony!

Celebrations in sports have always entertained the fans. And while Dibu and the Argentine supporters remain in the bliss of victory, Emiliano Martinez took more pleasure in his celebration than the rest. Although Emiliano's gesture is crude and adult-rated, fans either hate him for it or love him for what he did. On the other hand, Qatar and the World Cup officials loathe the Argentine goalie's celebration. But it was his moment, and Martinez did what he thought would express himself the most.