Wenyen Gabriel is a Sudanese-American professional basketball player who is signed to the Portland Trail Blazers of the National Basketball Association (NBA). Went undrafted in the 2018 NBA draft, he played for Sacramento Kings (2018–2020)Likewise, Gabriel played college basketball for the Kentucky Wildcats.

Wenyen Gabriel Net worth & Salary As Of 2020

From his professional career as a basketball player, Wenyen Gabriele earns a decent amount of money. As of 2020, the estimated net worth of Gabriel is around $1 million. This year, he will make $1,749,812 as a salary from Portland Trail Blazers.

Earlier, Gabriel played for the Sacramento Kings and gets paid a salary of $75,000 annually. Moreover, he must have earned a good amount of money from his college basketball career.

With a tremendous net worth, Wenyen Gabriele is living a lavish lifestyle.

Wenyen Gabriel is not married so far. Furthermore, he is not dating anyone at the current moment. To date, there are no records of Gabriel's dating life and relationships. Similarly, he hasn't been the part of controversy regarding his affairs. 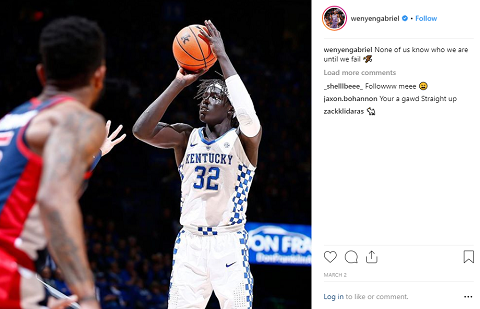 As Gabriel is not married yet and is not dating anyone, his sexuality is straight. Gabriel hasn't done or sad anything that makes people feel doubt about his sexuality.

Rather than being involved in any kind of personal stuff, Gabriel might be focusing on his career.

Wenyen Gabriel was born on 26th March 1997, in Khartoum, South Sudan. Gabriel was given the name 'Wenyen' which means "wipe your tears" in Dinka language because his sister, born a year earlier died in the infant.

His parents are father Makuac Gabriel and mother Rebecca Gak. After two weeks of his birth, Gabriel and his siblings Karima Gabriel and Komot Gabriel moved to Cairo, Egypt along with their mother in order to avoid the violence of the Second Sudanese Civil War. 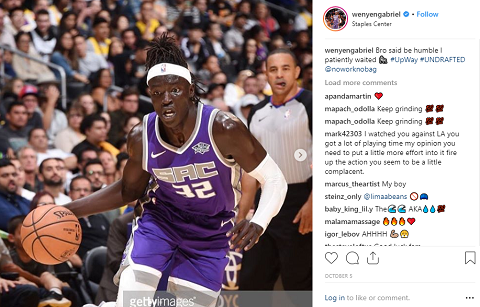 However, his mother worked to earn enough money to move their father to Cairo. Later, they moved to Manchester, New Hampshire, United States and received a US passport in 2015. He belongs to a Sudanese-American nationality and holds African-American ethnicity.

Gabriel played 38 matches as a freshman with 23 starts and made 4.6 points and 4.8 rebounds. However, during the sophomore year, he made 6.8 points and 5.4 rebounds in 37 games.

In the 2018 NBA draft, Gabriel remained undrafted. So Gabriel joined the Sacramento Kings for the 2018 NBA Summer League and signed a two-way contract with Kings on 31st July 2018.