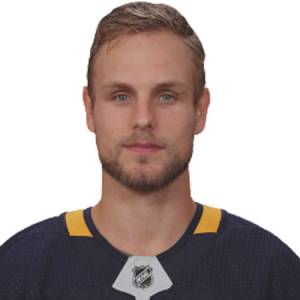 Vladimír Sobotka is a Czech professional Ice-hockey player who plays in the National Hockey League (NHL). As of 2019, Vladimír Sobotka currently plays for the Buffalo Sabres as their Center. Previously, he played for Boston Bruins and the St. Louis Blues.

As a Center, Vladimír Sobotka reportedly earns around $3,500,000 as his yearly salary from Buffalo Sabres. Further, Vladimír Sobotka has an estimated net worth of over $5 million. As per his marital status, he is married to his lovely wife, Nicole Novotná.

Vladimír Sobotka Net Worth And Salary

Exploring his marital status, he is a married man and currently, he is married to his lovely wife, Nicole Novotná. However, the information about when they tied a knot is not in the media yet. Further, his spouse,  Nicole is a Czech model by profession.

In addition, the duo is a parent of a 2 lovely daughters, Sofia Isabel who was born in early March of 2018 and Viky.

Further, exploring his Instagram account, he seems to be satisfied with his family and despite busy schedules, he frequently posts a picture spending time with his daughters and wife. Further, he is not involved in rumors about his past affairs or relationship yet.

Vladimír Sobotka was born on 2 July 1987, in Trebíc, Czechoslovakia. As per his nationality, he is Czech and belongs to the White ethnic group. Further, his star sign is Cancer. Further, the details about his parents and siblings are no in the media yet.

Sobotka played his first game against the New York Islanders in the 2007–08 season on 24 November 2007. His first NHL career goal was scored against Ty Conklin of the Pittsburgh Penguins later that season, on February 13, 2008. On 26 June 2010, in exchange for the rights to prospect David Warsofsky, the Boston Bruins traded Sobotka to the St. Louis Blues.

On 6 November 2010, after a turnover in the Bruins' zone, Sobotka recorded his first goal for the Blues against his former club, the Boston Bruins, beating Tuukka Rask. Sobotka signed with the Blues a three-year contract extension on June 15, 2011.