Watford, Hertfordshire native, Vinnie Jones represented as well as captained the Welsh national football team. A defensive midfielder, he was remarked for his very aggressive style of play, earning him a "hard man" name on the field.

As of 2020, Vinnie Jones has an estimated net worth of $10 million. His income source is widely considered his acting career but his 15 years long football career also contributed to building his worth. Though there is no exact figure of his football career earning or salary history, he might have summoned a few million dollars.

After retirement from football, he pursued a career as an actor making his debut with Lock, Stock, and Two Smoking Barrels, and continued with roles in mainstream films such as Snatch, Gone in 60 Seconds, Mean Machine, X-Men: The Last Stand, Elementary, and Arrow.

In 2017, he sold his Midcentury Modern-style home in Hollywood Hills for $2.025 million, which he originally purchased for $1.56 million.

Vinnie was married to his wife, Tanya Terry to her death in 2019. The couple tied the knot in 1994 and shared twenty-five years long blissful married life with two children: a daughter, Kaley Jay Terry from Tanya's past affair, and Aaron Elliston Jones.

Jones's son joined the British Army, after finishing his training in August 2008, and serves in the Blues and Royals. 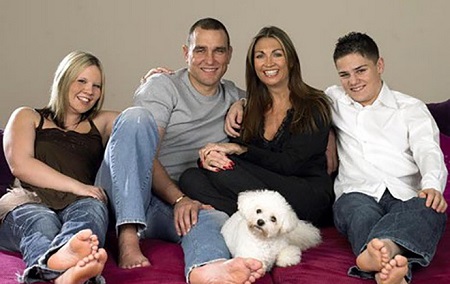 Vinnie Jones with his wife and children SOURCE: Celebrities

Following the tragic death of his wife, Vinnie has since moved back to the UK. The Mean Machine star wept as he revealed the tragic but tender moment his beloved wife Tanya slipped away. He told in heartbreaking detail how he gently kissed his soulmate and told her “I love you, I love you.”

In deathbed, Tanya was surrounded by Vinnie and five family members, including her daughter Kaley. Tanya died following a six-year battle with three forms of cancer. She was treated at Cedars Sinai Hospital in Los Angeles before living out her final days in the couple’s Hollywood home.

Vinne was born on 5th January 1965 under the star sign Capricorn. He is the son of Peter, a gamekeeper and Glenda Jones. Vinnie enrolled at Bedmond Junior Schook. Later his family relocated to Hertfordshire where he attended Langleybury School. He captained the Hertfordshire Schools football team as a teenager.

In June 1998, Jones was convicted of assault occasioning actual bodily harm and criminal damage against a neighbor a year before in November.

In December 2003, he was convicted of the charge and threatening behavior on an aircraft for an air rage incident, where he slapped a passenger in the face and threatened to murder the cabin crew while drunk on an aircraft. As a result, he was fined £1,100 and ordered to perform 80 hours of community service. Further, Hertfordshire police revoked Jones' firearms license and seized the weapons listed on the license