Umar Nurmagomedov is an MMA fighter who competes in the Bantamweight division of the Ultimate Fighting Championship. The Dagestani mixed martial artist has also paired up with Khabib Nurmagomedov, Islam Makhachev and many other UFC stars.

The fighter has won thirteen por MMA fights and has an impressive MMA record. He previously fought under several promotions like Fight Nights Global, Samara MMA Federation, etc and made his UFC debut on January 20, 2021, at UFC on ESPN 20.

The Russian national was born on 28, June 1995 in the Republic of Dagestan, Russia. Umar is also popular as the cousin of former lightweight champion Khabib Nurmagomedov. His zodiac sign is cancer. Information related to his education and childhood is still unknown. We will update you as soon as possible.

Umar's foundation style is wrestling and fights out of Chelyabinsk, Russia.

Umar is still undefeated and has a record of 13 wins and 0 losses. His pro-MMA record is quite impressive. He also has the 13 long wins streaks. As his style foundation of fighting is wrestling, his ground is a really strong ground game. He is very dominant in the ground game. 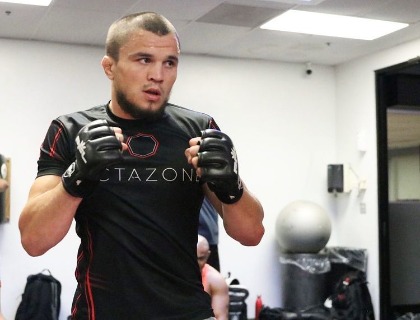 Out of his 13 fights, UJmar won one fight by TKO, six fights by submissions, and the remaining fights by unanimous decisions. In his weight division, Umar is very dominant i.e ground game-wise as well as striking-wise.

Umar has also teamed up with one of the most popular UFC stars Khabib Nurmagomedov and both trained together for some time in Russia.

The Russian fighter stands tall at a height of 5ft 8 inches and weighs 155lb (70kg). He fights in the Bantamweight division and represents the Team Eagles MMA.

Umar's Net worth and Earnings from UFC

The Russian fighter has just began fighting in the UFC which is the highest paying MMA promotion. His paycheck per match is reportedly more than $10,000 and will also get extra bonus according to his performance.

Umar defeated Sergey Morozov at UFC on ESPN 20 and earned $13,500 from the fight. He is still undefeated and is a promising fighter which will soon earn him millions of dollars in near future. Umar's main source of income is from MMA. Besides, he also makes some portion of his earnings from endorsement and sponsorships. Through all his hard work and earnings, he has been living a healthy and comfortable life.

Who is Umar Nurmagomedov dating? (Girlfriend and Relationship Status)

As of 2022, he is still single. He has not been previously engaged neither has talked about being in a relationship with anyone.

We are also unknown about the past relationship status of the Russian fighter. The fighter's life is quite private.