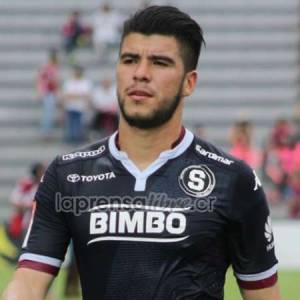 Ulises Segura is an international footballer who currently plays as a midfielder for Costa Rica National Team and D.C. United on a loan from Uruguay de Coronado. The 24 years old footballer has played for clubs that include Generacion Saprissa, and Deportivo Saprissa etc.

In 2017, he made his international debut with the Costa Rica national football team and till this date, he earned total three internationals caps.

Ulises Segura was born on June 23, 1993, in Guadalupe, Costa Rica. Ulises Segura is the professional name of Ulises Segura Machado. He holds a Costa Rican nationality. Born in a middle-class family, he started playing football since his childhood with his local team.

Ulises Segura's current market value is estimated at €359 thousand. His net worth of 2018 is not disclosed to his fans and media. He earns $60,000 as a yearly salary from his current club.

Segura's source of earning comes mostly from his playing for clubs and promoting brands as well as endorsements. Ulises Segura is the brand ambassador of Nike through which he maintains a healthy amount of money.

Segura has a good finance and is often seen enjoying his vacations in world's expensive destination. He also posts many pictures of his vacation on Twitter and Facebook.

Ulises Segura began his career with the youth team of Generacion Saprissa in 2012. He left the club after two years and joined the Deportivo Saprissa in 2014.

For the team, Deportivo Saprissa, Segura scored 14 goals in  115 appearances. He was the member of the team that won League FPD (2013-2017). On January 1, 2018, Segura was transferred to D.C. United. He is the agent of Dierolf Rechtsanwalte AG. Segura has a contract with the team which keeps him until December 2018.

On January 15, 2017, Ulises Segura earned his first international cap at the age of 23 under the coach Oscar Ramirez against Belize in Copa Centroamericana. For the nation, he played in 3 games.

Ulises Segura and his teammates Osvaldo Rodriguez, Rodney Wallace and Jose Guillermo Ortiz were called up for the friendly matches against Spain and Hungary in November 2017.

Ulises Segura is a married man and has a beautiful daughter. Segura is private kind of person and never spoken about his wife and children information in front of media.

Looking towards his Facebook and Twitter posts, they live a blissful life together.  Segura manages a good time for his family.

Segura is active on Twitter with more than 9 thousand followers. He joined the Twitter in September 2015 and since he posts numerous pictures of his teammates and family on Twitter.