Ugo Humbert is a rising French professional tennis player. He started his professional career in 2016, playing in the futures tour. Humbert has already won three ATP titles in his short career, winning his first ATP 250 main-draw match on home soil at the 2018 Moselle Open.

Ugo Humbert was born on June 26, 1998, in Metz, France. He is among the two children born to Eric Humbert and his wife, Anne Humbert. Both parents and sister are butchers and caterers and run a renowned store in Metz. Talking about his physical appearance, Ugo stands six feet and two inches tall and weighs 73 kg.

Know About Ugo Humbert's Net Worth and Earnings

Ugo Humbert has an estimated net worth of more than $2 Million. Ugo is very much early in his career but has already successfully accumulated a considerable sum to his net worth. A tennis player earns a reasonable sum through their sponsorship deals besides their tennis match earnings. In the ongoing season of 2021, The French player has made $501,485 from almost twenty-five matches. 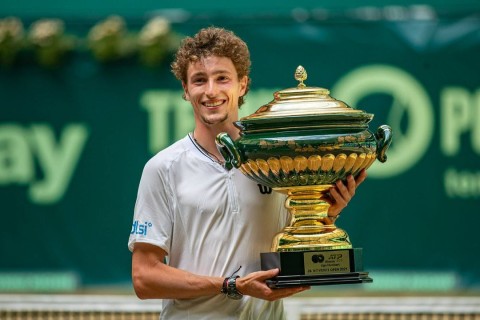 Ugo along with his ATP 500 Title SOURCE: [email protected]

Ugo is very much early in his career. Humbert seems to be focused on his career rather than spending time with people. He is believed to be single as of 2021. Also, there is no rumor of him dating anyone on the Internet. His Instagram timeline is filled with photos of his games and his training. Humbert is very close to his sister and travels to new places with his sister.

Ugo started training tennis from a very early age. He reached the Abierto Juvenil Mexicano doubles final with Geoffrey Blancaneaux. The French international suffered a string of injuries that prevented him from playing for a year and a half. Humbert finished his career-high junior ranking at No. 18 in January 2016. Ugo made his professional debut in 2017 in Futures title.

In September 2017, Ugo won his first Futures title in  Bagnères-de-Bigorre, where he had received a wild card. The following season, He had a bad season and made a comeback when he reached three Challenger finals. In October 2018, Humbert claimed his second Challenger title in Ortisei and entered in top-100 in the World tennis ranking. Shortly after the win, Ugo reached the fourth round in Wimbledon eventually lost to Novak Djokovic.

In early 2020, Humbert reached the ATP final in Auckland and won the final against Benoit Paire. He won his second ATP title in Antwerp. In Rolex Paris Masters, He recorded his second top-10 win over Stefanos Tsitsipas. In early 2021, Humbert won his first ATP 500 title at Halle Open and reached a career-high ATP ranking of No. 25 on June 21, 2021.