Tyrann Devine Mathieu a.k.a. Tyrann Mathieu is an American football safety currently signed to the Kansas City Chiefs of the National Football League (NFL). He finished his collegiate career at Louisiana State University (LSU). He was drafted by the Arizona Cardinals in the third round of the 2013 NFL Draft and also was a part of Houston Texans.

Nicknamed "The Honey Badger" and "The Landlord", Mathieu was born on 13th May 1992, under the star sign Taurus. As per nationality, the twenty-eight years old is holds American citizenship and is of Afro-American ethnic background. Further, he stands 5 ft 9 in (1.75 m) tall and weighs 190 lb (86 kg).

How Much Is Tyrann Mathieu's Net Worth In 2020?

Tyrann Mathieu's Wife: Is He Married?

Tyrann Mathieu is in a relationship with his long-time partner Sydni Paige Russell. The duo has been together since 2011 and is now planning to tie the knot. In Mid of 2019, Mathieu popped a question with an engagement ring worth an estimated $250,000. 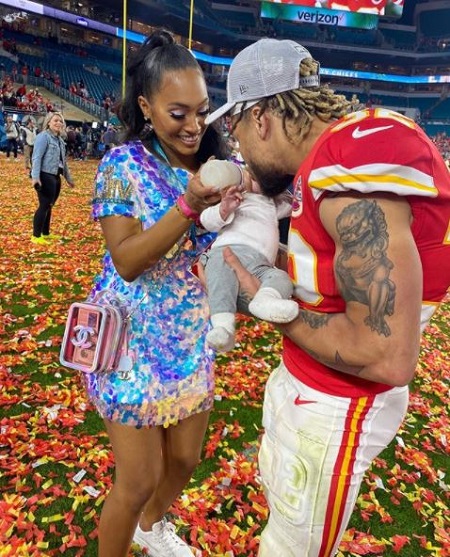 Mathieu and Russell have a young son and have been together since they were both students at Louisiana State University. Sydni Paige Russell Became a Mother in June of 2014 and socials is filled with pictures of her little boy, who was named after his father. In December 2019, they had their second child, a daughter, Jill Marie.

Mathieu was raised by his grandparents. His biological mother was not present the majority of the time whereas his biological father, Darrin Hayes, has been incarcerated for murder most of Mathieu's life. After his grandfather died in 1997, Mathieu was adopted by his uncle, Tyrone Mathieu, and aunt, Sheila Mathieu.