Trevor Penning is a rising American football player. The offensive tackle was announced for the 2022 NFL draft, forgoing his remaining years of eligibility at the University of Northern Iowa and was rated as one of the highest-rated offensive tackle and FCS prospects for the 2022 NFL Draft. He finished his high school career at Newman Catholic High School and committed to playing for Northern Iowa.

Clear Lake, Iowa native Trevor Penning was born on May 15, 1999. The 21-year-old is an American by nationality and belongs to white ethnic background. He stands the gigantic height of 6 ft 7 in (2.01 m) tall and weighs 329 lb (149 kg). He was born to his parents, Jeff and Teresa Penning and grew up with his siblings named Jared and Stephanie.

How Much Rich Is Trevor Penning in 2022? (Net worth and Career Earnings)

Penning is yet to start his professional career; for now, he plays as an offensive tackle for his team, Northern Iowa Panthers, and he has a lot of years to go for him.

As mentioned by the NCAA, college athletes are not paid by the colleges, so we cannot expect his networth to be large. Yet, Penning has been aided in his scholarships, accommodations, and flooding. The Panther's offensive tackler earns some earnings through merchandise and sponsorships. 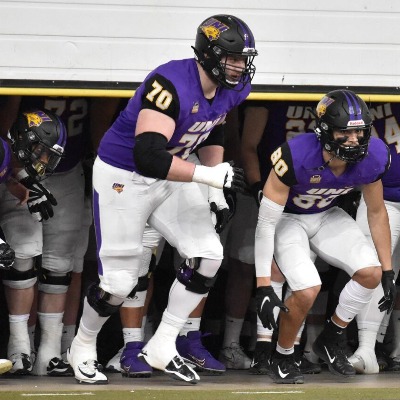 Iowa's offensive tackle is set to earn a huge amount to his net worth in the upcoming days. Many top clubs are keeping a close eye on him. If drafted in the first round, the player's salary will cross more than $10 Million.

As of 2022, Trevor Penning's net worth is under review but he was signed by WME Sports in 2022 which he posted on his Instagram and has a great year ahead.

The rising football player Trevor Penning is yet to come out publically with his love life. There is not much information about his love life as he is focused on his professional career.

Penning is active on social media and often posts about his professional life; he is not that open about his private life; he has not been seen dating a single girl on his Instagram so, Pennnig is believed to be single as of 2022.

Penning grew up in Clear Lake and attended Newman Catholic High School, where he started playing football; after some years in school, he committed to play for Northern Iowa as their offensive tackle.

The Northern Iowa offensive tackler, Penning, started five games as a junior player. He was rated as one of the highest-rated offensive tackle and FCS prospects for the 2022 NFL Draft.