Trevor Kokkinakis is the father of a Greek-Australian professional tennis player, Thanasi Kokkinakis. His son defeated then World Number 1 Roger Federer in the second round of the 2018 Miami Open. Since worlds know Trevor Kokkinakis here we brought information about his father in this article.

Both of Kokkinakis' parents are Greek. Father, Trevor is from Kalamata, Greece while mother, Voula is from Tripoli, Greece. Later, they immigrated to South Australia and settled in Adelaide. There Trevor and his wife gave birth to three children. 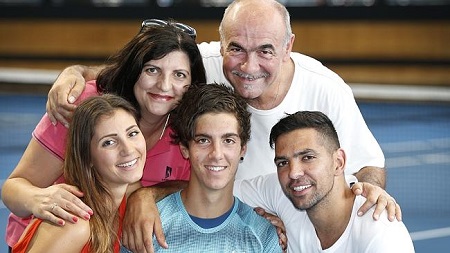 The eldest son, Pan followed the father's footsteps and became an engineer, and daughter, Christina, is in law and media. On the other hand, Thanasi Kokkinakis chose sports.

At the 2018 Miami Open, a clash between Thanasi Kokkinakis and Fernando Verdasco got a bit fiery after Verdasco wanted a supporter to be kicked out as “the guy behind him was talking between first and second serve”, but it turned out to be Kokkinakis’ father.

After both players had spoken to the chair umpire during the changeover, tempers blazed between them with Kokkinakis describing Verdasco’s behavior as ‘bulls---.”

Once Kokkinakis identified that it was his father who Verdasco was complaining about he replied, “That is affecting me. That’s my f***ing Dad.” After the Spaniard knows that Kokkonakis' dad, he promptly apologized, explaining that he thought it was the Australian’s coach who was talking between serves.

Kokkinakis lost to Fernando Verdasco in the third round, in a close third-set tiebreaker. In the earlier round, he defeated Roger Federer in the second round in three sets.

An engineer by profession, Trevor Kokkinakis may have earned a decent sum of money through his career. However, there is no exact figure of his net worth at the present time. According to the source, the average Engineer salary in Australia is $107,290 per year or $55.02 per hour.

On the other hand, Thanasi Kokkinakis' net worth is approximately $1.4 million. For sure, the Kokkinakis family is living a lavish lifestyle but a low-key.