6 feet 5 inches tall, Trevor Keels is an American basketball player who played college basketball for the Duke Blue Devils. Keels made headlines after he announced that he would leave his college career for the 2022 NBA Draft.

Trevor Keels is a skilled American basketball player who played college basketball for the Duke Blue Devils. He made his fans wait until the final hours on June 1, 2022, as he chose whether to play with the Blue Devils next season or turn professional. Later, it was revealed that he would take down his college career to remain in the draft. As we know, the draft has been set for June 23, 2022; Keels is predicted as a late first-round pick by some draft analysts and a second-rounder by others.

Talking about his family background, Keels was raised by his beloved parents Roland Keels and Keyosha Keels. For your information, Keels is not only the child of his parents as he grew up alongside his three siblings. He has two brothers named Trent Walker and Trevon Heard. Likewise, their sister's name is Raelyn Keels. The four kids share a strong bond.

Keels attended Paul VI Catholic High School in Chantilly, Virginia, and he played basketball there. He was also a teammate of Jeremy Roach. As a sophomore, Keels averaged 15.6 points, 3.9 rebounds and 2.3 assists per game. His performance helped him win Washington Catholic Athletic Conference (WCAC) Co-Player of the Year honors. 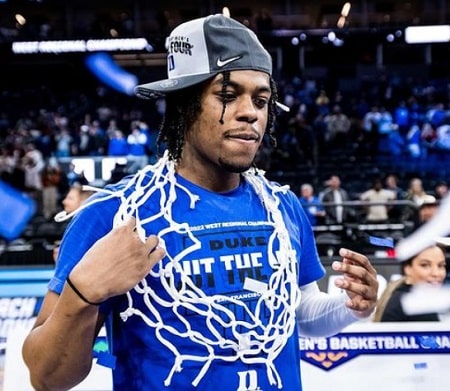 As a junior, he led Paul VI to the Virginia Independent Schools Athletic Association Division I state championship. And as a senior, Keels averaged 28.7 points, 9.1 rebounds, 7.2 assists and 3.8 steals per game. So, he was also named Virginia Gatorade Player of the Year.

Not only that but he was appointed to the McDonald's All-American Game, Jordan Brand Classic and Nike Hoop Summit rosters. Similarly, he earned his first NCAA Division I scholarship offer from Wake Forest. Keels spent as a consensus five-star recruit and one of the top shooting guards in the 2021 class.

Later, he got offers to play for various teams, including Virginia, Villanova and Kentucky, but he chose to be on the team of Duke. His collegiate debut came in November 2021, and during that time, he scored 25 points in a 79-71 win against Kentucky. In his first season, Keels averaged 11.5 points, 3.4 rebounds, and 2.7 assists. Not to mention, he was named to the ACC All-Rookie Team.

Following his freshman season, he announced his intention to enter the 2022 NBA draft. And on June 1, 2022, it was revealed that he would leave his college to stay in the 2022 draft. His decision has left many people disappointed, but some of them have also wished for the best. 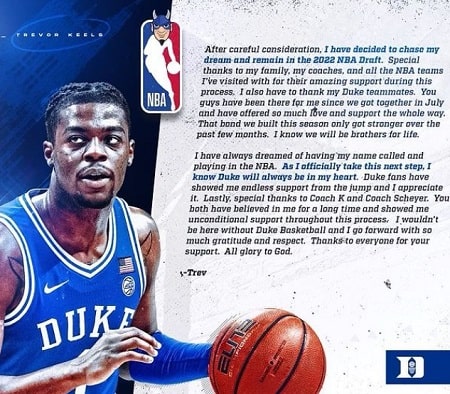 CAPTION: Trevor Keels chose to be in the NBA draft SOURCE: Instagram @trevorkeels

As mentioned earlier, the draft has been set for June 23, and his fans & well-wishers are excited to see him. Duke associate head coach Chris Carrawell said that they had supported Keels in his dream to play in NBA, but he also said that Duke would love to see him return. So, they stayed in regular contact with the shooting guard.

Career Earnings: Details On His Salary and Net Worth

The young player is yet to make a massive amount of money, but he may have collected a decent fortune from his profession as a basketball player. As we know, he is considered one of the best players on his team and has appeared in various games. So, his performances might have helped him earn some cash prizes.

As we know, Keels is now on his way to playing in NBA, and his income will surely help him live a lavish life. For your information, NBA players may earn around $7.5 million. Apart from that, there are many players who earn above the average wage.

Besides that, Keels is a shooting guard, and the average wage of an NBA shooting guard stands at $6.50 million in the 2020-21 season. So, when he gets signed with a team in NBA, then his earnings will be pretty impressive. It seems like he owns a range rover, as Keels once posted an image with the amazing car. 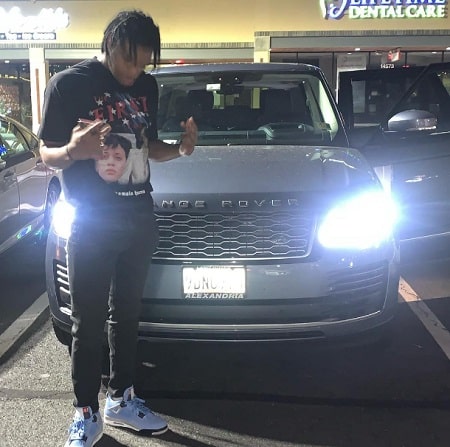 Furthermore, Keels often flaunts his lifestyle from his Instagram handle, where he is verified as @trevorkeels gaining over 51.2k followers. So, if he makes a sponsored post on his IG account, then he has the potential to earn around $218.25 - $363.75 from a single post.

Relationship Status: Do Keels Have A Girlfriend?

The 18-years aged player Keels appears to be a single boy. So, he does not have a girlfriend. There is no news of his past affairs. So, we can say that he has been leading a solitary life for a long time. Meanwhile, he is just 18 years old, and at this time, he is at the peak point of his career.

So, he is mostly focused on his career rather than getting involved in romantic affairs. However, Keels also prefers to keep his personal details away from the limelight like many other athletes. So, his private nature makes it more challenging to know about his life partner.

However, we can follow him on social media to get more updates regarding his affairs. In the future, Keels may give some updates about his love life.