Turner was born to parents Mark and Donna. He was born on June 30th, 1993, in Baynton Beach. Turner played his college baseball for North Carolina State University. Turner was traded to Washington Nationals in 2015 after he got selected by San Diego Padres in the first round of the 2014 Major League Baseball draft.

Turner is married to Kristen Harabedian. Both of them attended North Carolina State, not to mention it's the exact place where he met his future wife. Harabedian was a gymnast. Featured by Faces in the crowd on January 18th, 2010, Harabedian competed in high school gymnastics. Harabedian and Turner married in November 2018 at St. Joseph's Catholic Church. In February 2021, the couple announced the birth of their first child, Beckham Dash Turner.

Turner has a net worth of $10 million. He makes good money from his work. Trea is very private about his earnings, but sources claim him to make more than $7.5 Million as his annual salary. He is currently a great baseball player and is also doing great with his bank account. Information about his houses, lands, businesses, and cars are still not in the public record.

He was named to the All ACC first team. He was named a second-team All American by Perfect Game and a third-team All American by the National Collegiate Baseball Writers Association and Baseball America from 2012 -2013. He won the Brooks Wallace Award as the best college baseball shortstop of the year in 2014. He won the Major League Baseball Rookie of the Month Award in the National League for his performance in August 2016. He was announced as one of the five candidates in the 2018 All-Star Final Vote. 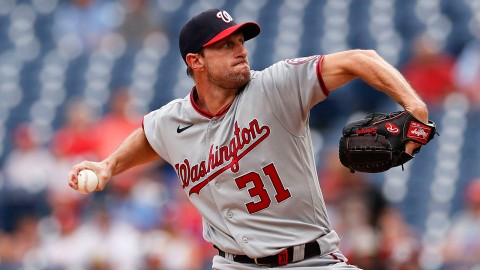 Trea throws the ball towards the batsman in an MLB game SOURCE: CBS Sports