Sixteen years old, Tomokazu Harimoto is the youngest table tennis player to win ITTF World Tour men's singles title at 14 and ITTF World Tour Grand Finals at 15, in August 2017 and December 2018 respectively. Currently, he is ranked #4 with a total point of 13655 in ITTF Men's World Ranking.

Currently, he worth $0.2 million as of 2019. Regarding his love life, he is possibly single.

At the age of 14 years, 207 days, he won men's singles title at the Japanese National Championships in January 2018. Harimoto's net worth is approximately $0.2 million, mostly earned through his tennis career.

According to the source, an agreement between Seamaster and ITTF for the 2017 World Tour had a new development with a cumulative $150,000 increase in the prize money. Hence, Harimoto surely has won a lucrative sum as prize money from the 2017 ITTF World Tour Czech Open.

That same year, he also participated at T2 Asia Pacific League which had huge prize money of $1.5 million. If he could have made it gold, he would be a millionaire now.

Other than that, the teen tennis players have a sponsorship deal with BUTTERFLY PRODUCT.

Harimoto, until the age of 16 in 2019, has defeated some of the world-class players like Ma Long, Xu Xin, Fan Zhendong, etc.

Single At The Moment

When it comes to his personal life, Tomokazu Harimoto is a private person. There is no news and rumors related to his's love life such as dating or girlfriend. It seems, he is focused on his career rather than involving in a romantic relationship yet.

Besides, he actively surfs Instagram where he has 34.3k followers. What's more, he enjoys watching movies, playing baseball and reading in his leisure time.

Tomokazu Harimoto was born to former table tennis players Zhang Yu (father) and Zhang Ling (mother). His parents represented China at the 43rd World Table Tennis Championships in Tianjin. Born as Zhang Zhihe, he legally changed his surname to Harimoto after he became a naturalized citizen of Japan in 2014. 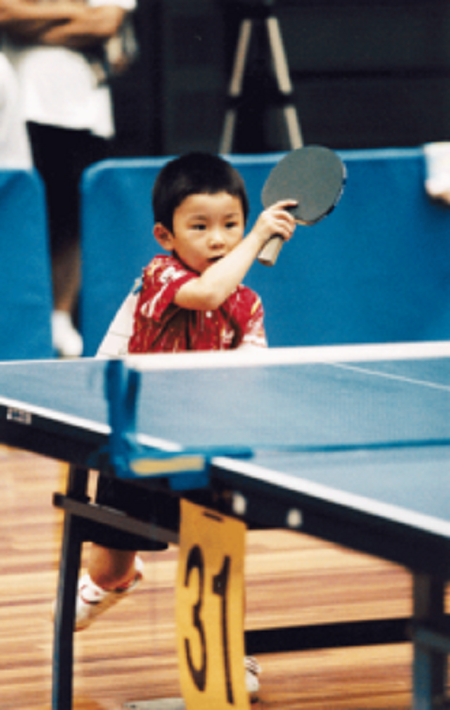 Following his parent's footstep, Harimoto started playing table tennis at the tender age of two. Upon graduation from East Miyagi Elementary School, he moved to Tokyo to enroll at the JOC Elite Academy.