Satoransky earns around $3.2 million in a year and has an estimated net worth of $5 million in 2019. He is currently married to his girlfriend Anna Maurerova.

Tomas Satoransky Net worth and Salary

Currently, the net worth of Satoransky is estimated to be around $5 million. Not to mention. Tomas Satoransky earns a tremendous amount of money from his professional career as a basketball player. He previously played for teams including USK Praha, CB Sevilla, and FC Barcelona Lassa.

As of now, Satoransky plays for the Washington Wizards of NBA. He signed a three-year contract with Wizards for $9 million which included an average annual salary of $3,000,000 along with the base salary of $3,129,187.

Tomas Satornskay is married to his long-term girlfriend Anna Maurerova. The couple tied the knot on July 11, 2018. Various reports revealed that the couple dated each other for 7 years since 2011 before getting married in mid-2018.

His wife Anna is also a former basketball player. 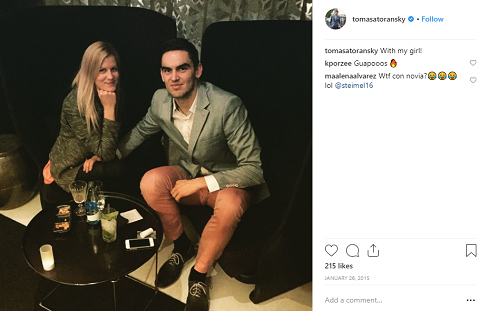 The couple was spotted together for the first time on 27th November 2014 in Barcelona, Spain.

They are successfully maintaining their marital life without facing any rumors of divorce. Other than this, there are no records of Satoransky's other affairs and relationships.

Tomas Satoransky was born on 30th October 1991, in Prague, Czech Republic. He was raised by his father Pavel Satoransky.  He belongs to a Czech Nationality. However, the educational background of Satoransky is yet to be revealed.

Tomas Satoransky initially played for the USK Praha, a Czech professional basketball team for two years from 2007 to 2009. Later, he signed a contract with CB Sevilla of the Spanish ACB League in 2009. He played five seasons for Sevilla.

In the 2012 NBA draft, Satoransky was drafted by Washington Wizards in the second round with 32nd overall pick. He played 2012 NBA Summer League for Wizards. Similarly, Satoransky signed a two-year contract with FC Barcelona Lassa in July 2016 and parted away in July 2016.

Satoransky re-signed for Washington Wizards on 21st July 2016. He scored career-high 29 points in a match against Chicago Bulls.