Alize Johnson is an American professional Basketball player who plays in the National Basketball Association (NBA). As of 2018, Alize DeShawn Johnson currently plays for the Fort Wayne Mad Ants as their Forward, on assignment from the Indiana Pacers.

Alize DeShawn Johnson was born on April 22, 1996, in Williamsport, Pennsylvania to parents David Hill and Chanelle Johnson. As per his nationality, he is American and belongs to African ethnic group. Further, his star sign is Taurus. He grew up along with his siblings, David, Davion, Nasza, Davesha, Destiny, Davida and Alana.

Alize Johnson Net Worth And Salary

Johnson made his debut for the Pacers at the 2018 NBA Summer League in Las Vegas on 6 July 2018, where he scored 15 points against the Houston Rockets, with 4 rebounds and 2 assists in 16 minutes. Johnson signed a fully guaranteed agreement with the Pacers on 17 July 2018. 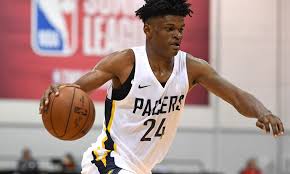 Further, he wears jersey no 24, playing along with his star teammates Bojan Bogdanovic, Darren Collison, Cory Joseph and many more.

Some of his career achievements and awards are:

The Famous NBA star is 6 feet 9 inch in height and weighs around 212 lbs. Other than being a famous NBA Forward, Alize DeShawn Johnson is pretty famous in social media, having 30k followers on Instagram and 6,683 followers on Twitter.

In addition, McDermott appears to focus on building up his career and the details of his current affairs/relationship are not available yet in the media.