Tom Herman is a well-known American football coach. Tom has been working as the head coach for the Chicago Beras since 2021. He started his coaching career in 1998 as a Wide receivers coach for Texas Lutheran. Herman was named the AAC Coach of the Year in 2015.

Tom Herman was born Thomas Herman III on June 2, 1975, in Cincinnati, Ohio. He is the son of Thomas Herman Jr. and his wife, Rita Herman. Tom is yet to share a word about his parents. Herman graduated from Simi Valley High School, enrolled at the California Lutheran University, and earned his B.S. in Business Administration. He later completed his master's degree from the University of Texas at Austin.

Tom played football in his early days and was an All-Southern California Athletic Conference wide receiver. After graduating from the University, Herman joined Texas Lutheran University and started working as a receivers coach. The following year, He moved to the University of Texas and worked as a graduate assistant for a year. In 2001, Sam Houston State University hired him as their new Wide receivers coach/special teams coach. 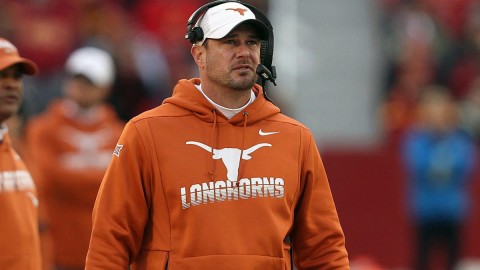 Texas Tech hired him as their new Offensive coordinator/quarterbacks coach. After spending two seasons with the team, Herman moved to Rice University as their new Offensive coordinator/quarterbacks coach. From 2006 until 2014, Tom moved to Iowa State and Ohio State before moving to Houston as a Head coach. In his same season with Ohio State, The team won the CFP national champion and Broyles Award.

In 2015, the University of Houston signed him as the new head coach. Tom led the team to the Peach Bowl champion and AAC Champion in his first year with the team. Herman was awarded the AAC Coach of the year. In November 2016,  Herman was hired as the new head coach at Texas and signed a five-year contract with a base salary of $5 million per year. After spending five seasons with Texas, Chicago Bears signed him as their new Offensive analyst.

Tom walked down his wedding aisle along with Michelle Herman. The dup walked down their wedding aisle in the late 2000s. Shortly after the wedding, the duo welcomed their first child, a daughter, Priya. The pair is the proud parents of two other sons, Maddock and Maverick. Tom attends an event along with his wife and children SOURCE: LongHorns

The family of five is living a happy married life. Tom is very much private about his personal life but takes his family to attend the games.

Tom has a net worth of more than $20 Million. He has accumulated most of his net worth through his successful football career. In 2020, Herman took home $15,416,667 while working as the head coach for the Texas Longhorns. As per sources, The head coach will receive approximately $15.4 million from his contract with the Chicago Bears.