Brian Flores is a rising American football coach. He is currently working as the head coach for the Miami Dolphins in the National Football League since 2019. Flores is part of the three-times Super Bowl-winning team as coaches for different fields. Brian started his career as a scouting assistant in 2004.

Brian Flores was born Brian Francisco Flores on February 24, 1981, in Brooklyn, New York. He is among the five children born to Raul and his wife, Maria Flores. Brian has not shared much about his parents and his siblings with the public. He is of Honduran descent and holds American nationality. Brian graduated from Poly Prep Country Day School and enrolled at Boston College. Talking about his physical appearance, Brian stands six feet two inches tall and weighs over 90 kg.

Brian played football for his High School team and also got to play for the Boston College football team as a linebacker from 1999 until 2003. At the end of his senior year, Flores had a major injury that prevented him from playing in the NFL. After graduating from the University, Flores joined the Patriots as a scouting assistant. The franchise won their third super bowl in the Super Bowl XXXIX. 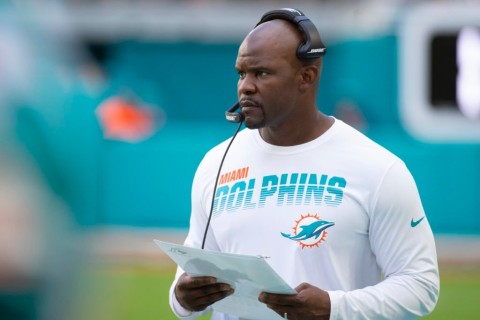 Brian spent his next two seasons as a scouting assistant and then worked as a Pro Scout until 2007. In early 2008, New England Patriots signed him as their new special team assistant coach. Flores worked with the team for two years and got promoted as assistant offense & special teams coach in 2010. In 2011, the Patriots promoted him as their Defensive assistant.

Brian worked as a safeties coach from 2012 until 2015 and then as a Linebackers coach for three seasons. It was during the season, and the Patriots won the Super Bowl XLIX. In 2016, He got promoted to Linebackers coach and Defensive play-caller in 2018. After spending more than fifteen years with the franchise, In 2019, Miami Dolphins hired Flores as their new head coach.

Brian took charge of sixteen games and just five games in his first season and lost the remaining eleven. The following season, Flores won ten matches, lost six, and finished second in the AFC East. Many considered him as the contender of the NFL Coach of the Year.

Who is Brian Flores Married To? Know About His Wife and Children

Brian is married to his longtime girlfriend, Jennifer Maria Duncan Flores. They exchanged their wedding vows in 2009. The duo had been dating each other for several years before their wedding. 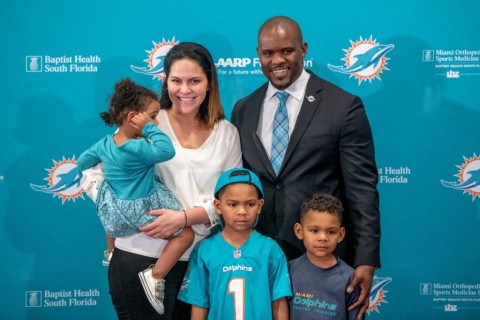 Brian takes his wife and their children to an event SOURCE: Getty Images

Brian and Jennifer are the proud parents of three children and relocated to South Florida in 2019 after more than a decade in New England.

Brian Flores has an estimated net worth of more than $5 Million. Flores worked with the New England Patriots for almost fifteen years in numerous positions. In 2019, He joined Miami Dolphins with a six-year contract until 2024. None of them have shared a word about the economic factor of the contract. Bill Belichick is the highest-earning head coach in the NFL with a salary of $12.5 Million.