Tim Cahill is a professional football player from Australia who currently plays for Jamshedpur FC in the Indian Super League. He has previously played for Everton in EPL, New York Red Bulls in MLS, Shanghai Shenhua in the Chinese Super League and several other clubs.

Cahill is also the all-time leading goalscorer of Australia in international games. He took retirement from international football recently in November 2018.

The former Australian team captain Tim Cahill was born on December 6, 1979. He was born in  Sydney, Australia to father Tim Cahill Sr. and mother Sisifo Cahill. He is Australian by his nationality. His birth sign is Sagittarius.

Cahill's father is English of Irish descent while his mother a Samoan. He was born in a rugby-playing family but was encouraged to play football since his childhood. He also has a brother named Chris Cahill who is a football player for Samoa and is the former captain.

Since 2015, he was associated with the Chinese football club name Shanghai Shenhua. He remained with Shenhua until 2016 and scored 11 goals in 28 matches.

Cahill moved to another Chinese club Hangzhou Greentown where he played 17 matches and netted 4 goals. The same year, he joined Australian club Melbourne city and played 28 matches. After scoring 11 goals, he joined his former club Millwall and appeared in 10 matches.

He currently plays in the Indian Super League for Jamshedpur since 2018. 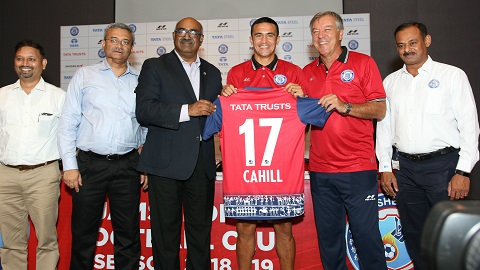 Cahill has scored total 45 goals in his intl. game and is regarded as the greatest Australian footballer of all time. He is also the leading goalscorer of Australia. Cahil is also the player to score goals at 2006, 2010 and 2014 FIFA World Cups beside Portuguese star Cristiano Ronaldo, Mexican defender Rafael Márquez, Dutch players Robin van Persie and Arjen Robben, German player Miroslav Klose, and American Clint Dempsey.

Former Australian Captain and forwarder Tim Cahill official retired from Australian international Soccer scene on 20th November 2018. In his final match, Socceroos beat Lebanon netting 3 goals to 0 scores. The whole crowd was seen on their feet to acknowledge one of the greatest players Australia has ever seen after the friendlies with the 82nd ranked in the world.

Tim Cahill is a married to his wife Rebekah Greenhill since 2010. The lovely duo got married in the beautiful city of Las Vegas. Tim is living happily with his wife and four children: Kyah (son, born 2003), Shae (son, born April 2005), Sienna (daughter, born 2007), and Cruz (son, born September 2012) from their eight years long married relationship. 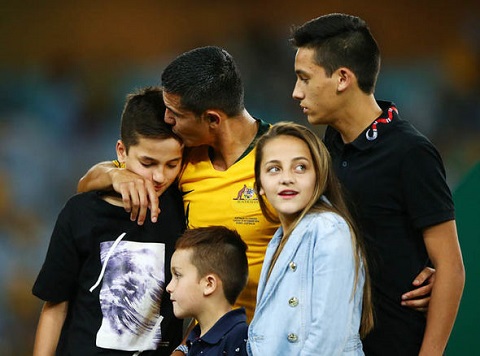 He has a beautiful home in his hometown of Sydney, and also owns several homes in Florida, New York, Shanghai, and England. In November 2017, the 38-year-old Australian soccer star reportedly bought a 13-hectare of land in Byron Bay worth $1.7m.

Other than being a world-famous player, he is also associated in many humanitarian works for organizations like UNICEF.

Tim Cahill Salary and Net Worth

According to numerous tabloids Cahill as of 2019, has an estimated net worth of $12million / £9.35 million. While at Everton, the Socceroo star reportedly received an annual salary of £2.9 million, which is around $3.3 million.

Tim Cahill is 5 feet and 10 inches / 1.80 m tall in height and weight around 64 Kgs. Tim has a very attractive personality.