Thidapa Suwannapura was born Thidapa "Jasmine" Suwannapura on Novemeber 20, 1992, in Bangkok, Thailand. She rose to fame through her successful career so, much information about her early life and her parents is still under the radar. After graduating from High School, Thidapa enrolled at Ramkhamaeng University. Suwannapura stands five feet and five inches tall and weighs 60 kg.

Thidapa Suwannapura has an estimated net worth of more than $2 Million. A golf player earns as per the end of the event rather than winning a whole series. Also, they accumulate a considerable sum through their sponsorship and advertising deals. Suwannapura has a sponsorship deal with Singha Corporation and PRGR. 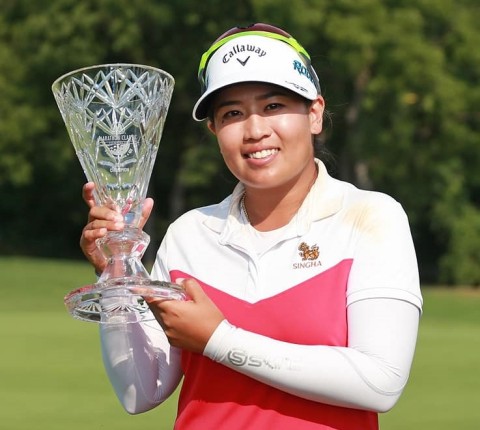 Thidapa earned $137,554 while playing in twenty-one events and making cuts in the rookie season of 2013. The following season, She took home $240,214 and recorded one top-10 finish, a career-best seventh-place finish at the Kingsmill Championship Presented by JTBC. In the next three seasons, Suwannapura made close to $100,000.

In 2018, The Thai professional golf player made $491,117 when she became a Rolex First-Time Winner at the Marathon Classic. In the 2019 season, Thidapa earned $497,171 from thirty-one events. Last season, Suwannapura took home $587,829, which is her Highest earning in a single season to date. She is very much early in her career and shall be making more in the future. Totaling her prize money from the LPGA events, it sums to $2,305,094.

Thidapa is very much private in terms of her relationship and love life. She has not shared a word to date about her boyfriend. Suwannapura is believed to be single as of 2021. There is no rumor of her dating anyone in public. Thidapa is at the peak of her career and must be focusing on her career. The golf player likes to visit new places and keeps uploading her photos regularly on her Instagram timeline.

Thidapa started playing golf at the age of five. She credits her dad as the person who most influenced her game. Suwannapura won Singha Pattaya Open in 2008 as an amateur. The following season, She won Srixon Junior International. In 2010, Suwannapura rose to fame after winning Malaysia Amateur Open, Honda Junior Masters, Riverwoods Junior Championship.

Thidapa turned professional in 2011 and made her debut in the Symetra Tour. She won her first title the same year at the Singhe Pattaya Open. In 2012, Suwannapura won Vidalia Championship at the Symetra Tour. In 2018, Thidapa won her first LPGA tour at Marathon Classic. The Following season, She recorded her second LPGA title at the Dow Great Leakes Bay Invitational with Cydney Clanton.

In 2020, Suwannapura finished the Women's British Open as a runner-up against Sophia Popov. In early 2021, She finished the Volunteers of Americas Texas in T22 position.