Sophia Popov is a well-established German professional golfer. She has been playing golf since 2014 and has been part of the LPGA Tour and Symetra Tour. Sophia could not continue her amateur career's legacy to the Professional level. Although, Its been more than six years of her professional debut but has won just four significant tours.

Sophia Popov celebrates her birthday on October 2. She was born in 1992 in the United States. Popov, along with her family, moved to Germany when she was four years old. Sophia is among the two children born to Claudia Popav and her husband, Philip Popov. Her father was a first division field hockey player, and her mother was an avid swimmer at Stanford. She has a brother named Nicholas, who is a swimmer in Arizona.

Sophia Popov has an estimated net worth of more than $1 Million. Sophia earns a reasonable amount through her contracts and endorsement deals. As a golf player makes as per the score he/she scores in a match, everyone involved with the tour gets some amount to take home. Popov has represented Germany in several international tournaments, so; she must be receiving an adequate amount from Government. 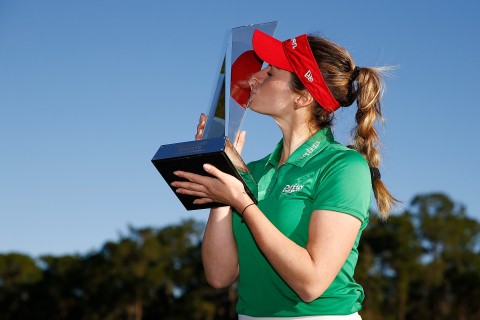 Who is Sophia Popov Dating? Know About Her Relationship Status

The twenty-eight years old golfer is involved in a romantic relationship with her boyfriend, Maximilian Mehles. The love birds opened about their relationship in 2019. There is not much information about their first meeting instance. Mehles can be seen attending Sophia's games. In 2020, For the British Open, He worked as her caddie.

Sophia started playing golf from a very early age. After graduating from High School, She enrolled at the University of Southern California In Los Angeles. Popov won three major trophies during her amateur career. i.e. International European, Junior Solheim Cup, and Espirito Santo Trophy. After graduating from University, She turned professional at the end of 2014.

In 2015, Popov got the chance to work with the German broadcast team for German television during the Solheim Cup. In 2016, Sophia qualified for the U.S Women's Open. She did not make an excellent start to her professional career. In 2019, She qualified for the LPGA Tour. She won three tournaments on the Cactus Tour, a mini-tour based in Arizona.

Talking about the physical appearance of Sophia Popov, She is five feet and seven inches tall and weighs 55 kgs.