Cydney Clanton is a rising American professional golf player. She is currently playing in the LPGA Tour. Cydney made her professional debut in 2011. Clanton played in the Symetra Tour in her early days. Cydney has won three professional events, including one LPGA Tour and two Symetra Tour.

Cydney Clanton was born on July 18, 1989, in Winston-Salem, North Carolina. She is among the four children born to Bobby Clanton and his wife, Jeannie Clanton. Cydney has three siblings Chase, Cody, and Caleb. After graduating from Concord High School, Clanton enrolled at Auburn University and majored in finance. Cydney stands five feet and ten inches tall and weighs 65 kg. 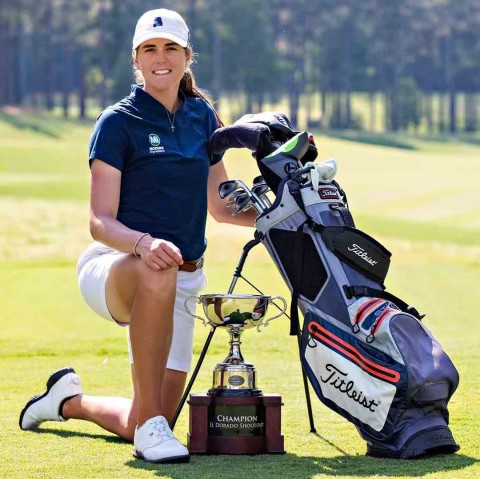 Cydney shares a photo with her title and sponsors SOURCE: Golf Channel.

In the 2016 season, Cydney took home $97,593 while appearing in twenty-two events. She played in twenty-five events the following season and earned $246,414 while reaching the second round at the Bank of Hope Founders Cup and the final round at the Meijer LPGA Classic for Simply Give. In the 2018 season, Clanton earned $113,212 as her prize money.

In 2019, Clanton made the most of her prize money in a single season while taking home $318,980 from just twelve events. She was the winner of the 2019 Murphy USA El Dorado Shootout on the Symetra Tour. Totaling her prize money from LPGA, it sums to $1,309,466.

Cydney does not show any presence on social media. She is very much private in terms of her relationship status and love life. In addition, there is no rumor of her dating anyone to date. Clanton could be single or living a happy married life or could be dating.

Cydney started playing golf from High School days. She was part of the Auburn University golf team and won the North and South Women's Amateur. Clanton made her professional debut in 2011 at the Symetra Tour. The following year, She made her LPGA debut after making it through the LPGA Final Qualifying Tournament.

In 2013, Cydney won her first professional title at the Four Winds Invitational. It took her more than seven years to win her first LPGA title. Clanton won the 2019 Dow Great Lakes bay Invitational along with Jasmine Suwannapura. The same year, She won the Murphy USA El Dorado Shootout at the Symetra Tour. In early 2021, Clanton finished the Women's PGA Championship at T9 position behind Danielle Kang and Nelly Korda.