Taynara Melo de Carvalho, a.k.a Tay Conti is a Brazilian professional wrestler and judoka who is signed to All Elite Wrestling. Known for her stint in WWE, she wrestled on the NXT brand under the ring name Taynara Conti.

A professional wrestler since 2017, Tay Conti has earned a tremendous sum. As of 2021, her net worth is believed to be no less than $0.5 million. 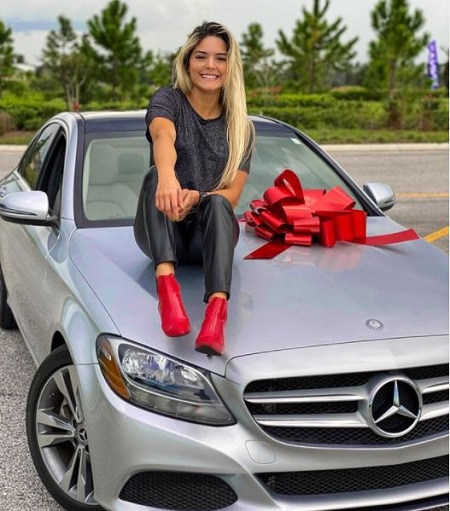 In September 2020, she scored her first car, Mercedes Benz. She wrote, "I had to get behind the bus many times because I didn't have credit on my RioCard, today I drive my Mercedes Fruit of my work and my Faith Got my first Benz!" on her IG.

In an interview with Ring The Belle, Conti disclosed about being married for the first time publicly. She said Conti is her husband’s last name, her maiden name is Taynara Melo de Carvalho. Her husband, Jorge Conti is half-Italian, who is also a judoka, and won a bronze medal at the US Open judo tournament in Fort Lauderdale in 2017.

Earlier, Tay has shared her wedding picture which is now nowhere to be found. On the other hand, Jorge has set his Instagram private. Hope the couple is doing well.

Tay Conti has a black belt in Judo and a blue belt in Brazilian jiu-jitsu. At the 2016 Summer Olympic, she competed in trials for the Brazilian Olympic team.

Later she started in artistic gymnastics in CR Vasco da Gama, however, she moved to the martial arts. Conti was a regional champion, 4X state champion, and 4X Brazilian runner-up. Later, she joined the Brazilian team, competing in the European circuit in Portugal and Germany.

In October 2016, Conti signed to the WWE. On 1st April 2017, she made her professional wrestling debut at WrestleMania Axxess in Orlando, Florida against Sarah Bridges.

On 11 October 2017, Conti appeared on a television episode of NXT, interfering in a triple threat match between Liv Morgan, Nikki Cross, and Peyton Royce on behalf of The Undisputed Era to prevent Cross from winning the match. This resulted in a match between Conti and Cross on the November 1 episode of NXT, where Conti got defeated.

In August 2020, Conti appeared for All Elite Wrestling (AEW), participating in the AEW Women's Tag Team Cup Tournament: The Deadly Draw and teaming with Anna Jay. On September 9, 2020, she signed with the company.