Tanner Boser is a Canadian professional MMA player who performs in the Heavyweight division of UFC. In his entire pro MMA career, he has a record of 16 wins in his 22 bouts. Additionally, he is also well known with the ring name "THE BULLDOZER" and stands in the 82nd position among the current best MMA heavyweight fighter.

As per the reports, Tanner is rumored to be in a relationship with a girl named, Laine. Reportedly, he holds a massive net worth over $2 million, generated from his professional career.

Tanner Boser Earnings; How much is his Net Worth?

As of 2019, Tanner Boser has accumulated a massive net worth over $2 million which is generated from his professional career. Also, the details about his career earnings are not in the media yet. However, the fighters are known for living an extravagant lifestyle and for such kind of lifestyle it is impossible without a good paycheque.

Particularly, the MMA players are reported to earn $150,000 on average and with the rising fame, it is sure that Tanner is earning a good amount. Exploring his social account, he seems to be enjoying his life in an outrageous way, suggesting that he has accumulated a massive fortune from his professional career.

Moreover, he has never flaunted about his valuable assets in his social account. In fact, the player with such hype is obvious to have expensive cars and luxurious house. Well, for more information, make sure you visit us frequently until we come up with the detailed information about his assets including cars and house.

Is Tanner Boser in a Relationship? Know about her Personal Life

Tanner Boser, who still is unmarried, is in a romantic relationship with his girlfriend Laine. Although we don't have any details about the duo's relationship history, the couple seems to be enjoying their romantic relationship. Additionally, he often posts a picture of her in his social account which suggests that he adores his girl alot. 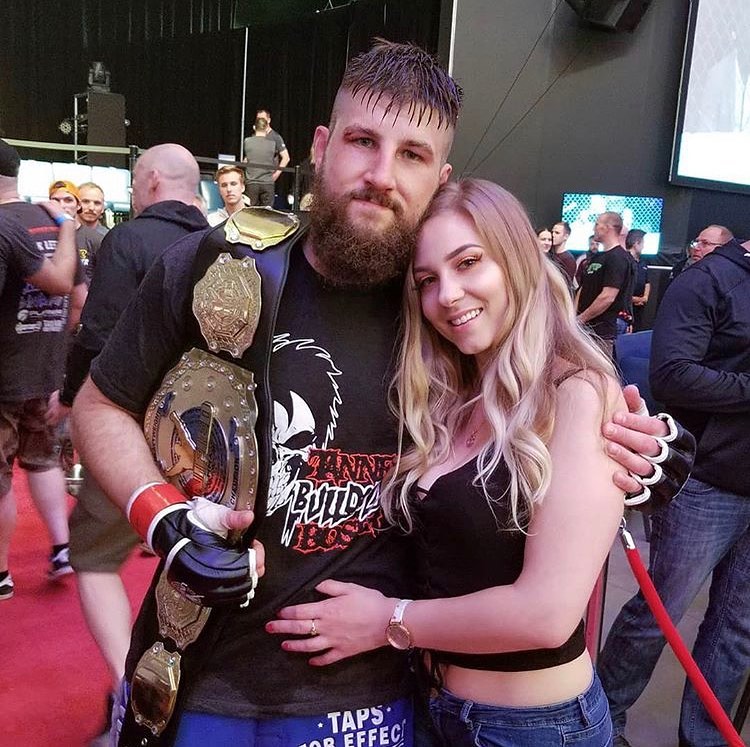 Tanner who has been working hard, hitting the gym has a massive body that perfectly fits for fighting. In particular, he stands at a height of 6'2" (188cm) and weighs around 249.0 lbs.

Tanner was born on August 2, 1991, in  Bonnyville, Alberta, Canada but the details about his parents are not in the media yet. Also, he is is a Canadain native and belongs to the white ethnic group. Also, he was born under the star sign Leo.

As of 2019, Tanner competes in the Heavyweight division of UFC. In his entire career, he has performed a fight with the famous MMA players such as DJ Linderman, Mike Coby, Dell Knebush and many more.