Tanguy Nianzou is a professional footballer who plays for Bundesliga club Bayern Munich in the center-back position. Before Bayern, he played for French club Paris Saint Germain. There, at the age of 17 years and 184 days, he played his first Champions League match becoming the youngest ever in PSG history.

In international football, he plays for France and was one of the key players in the French squad that reached the 2019 U-17 Championship. Bayern Munich center-back Tanguy is very skilled in headers too that is surely going to help him in his career. Nianzou Tanguy-Austin Kouassi, mostly known by the name Tanguy Nianzou was born on June 7, 2002, in Paris France. His birth sign is Gemini and holds citizenship of both France and the Ivory Coast.

Nianzou's parents are of Ivory Coast origin but residing in France at the time of his birth. However, details regarding the French center-back are still unknown to the public.

He spent his early life in France and joined Epinay-Athletico at the age of six. Talented from a young age, it took no time to establish himself as one of the promising youth players in modern football.

The French U-20 centreback possesses a height of 6 feet 2 inches and a weight of 86 kg. His muscular body and perfect height make him a beast in his team post while making him unstoppable at the opponent's post.

His hair color is black and has dark brown eye color. His dark brown face represents his Ivorian origin.

Net worth and Contract, and Salary in 2021 with Bayern Munich

Tanguy Nianzou has an estimated net worth of $3 million in 2021. He earned most of his income from playing football with different clubs along with bonuses, wages, and endorsements with brands and sponsors. As per transfermarkt, his market value is €11 million but it is surely going to raise regarding his talent and the impact he has on the team.

According to sources, Tanguy's salary with Bayern Munich is £1.6 million per year. It means he earns about £31,000 per week with a 2020/21 Bundesliga winner. It is a pretty good amount to a 19-year-old young prospect. 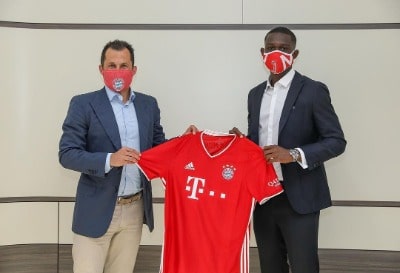 The highest-paid player in his club is Robert Lewandowski who earns £18,304,000 yearly.

The PSG product was transferred to Bayern from PSG on free transfer not realizing the value he brings to the team.

2019 U-17 Champion's outfitter is Adidas as he has also mentioned them in his Insta bio. But his contract with Adidas is not revealed to the public.

Adidas is also the sponsor of footballers like Lionel Messi, Paul Pogba, Mohammad Salah, Paulo Dybala, etc. These top-class players earn a hefty amount by having partnerships with the sporting brand, Adidas.

Who is Tanguy dating?

Tanguy Nianzou's relationship status is still unclear to the public as he has never mentioned his affairs with any girls. And checking out his Instagram, he has not shared photos with any partners.

The 2019 Titi d'Or winner is quite secretive about his girlfriend and dating life. It may be that he likes his love life behind the camera rather than showing his sweethearts in public.

Looking at his age and personal life, we can ensure that the youngster is not married yet. It seems the French center-back is too much focused on his career. He is focusing to improve his football career rather than spending time on love and affairs.

Tanguy is a PSG academy graduate who made his professional debut against Montpellier in 2019. He scored his first professional goal for PSG on Jan 22, 2020, against Reims.

The 2019/20 UCL runner-up' center back has made 13 senior appearances for PSG before leaving the French club who has signed Messi in August 2021 from Barcelona. He has already made his debut with Munich on November 28, 2020, against VfB Stuttgart.