Ranked at #20 among current Best Female Flyweight, Taila Santos is a rising MMA Fighter. Santos has been climbing the ladder of success in her professional career. Having won sixteen out of the first seventeen matches, Taila is right at the top of her career.

Taila started her career in 2013 as an amateur. She played a single match as an amateur and lost that. Ever since, she has lost just a single game to date. Talking about her physical appearance, Taila stands five feet five inches tall and weighs fifty-six kgs. She has a fighting stance of an orthodox.

How Much is Taila Santos Earnings And Net Worth?

Taila Santos has an estimated net worth of $100,000. She has been earning much of her net worth through her short career of fighting. Taila is very much early in her career. She will be adding much more in the days to come to her net worth. Jinh Yu Frey and Arlene Blencowe are two famous Female MMA fighters with a similar net worth to Taila. 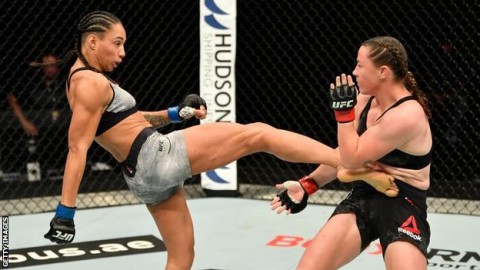 Taila has earned much of her net worth through MMA SOURCE: Getty Images

Taila Santos was born on June 22, 1993, in Brazil. She seems to be the only child born to her parents. There is nothing much about her parents and her early life information with the media personals. Also, Information about her education is under the radar. 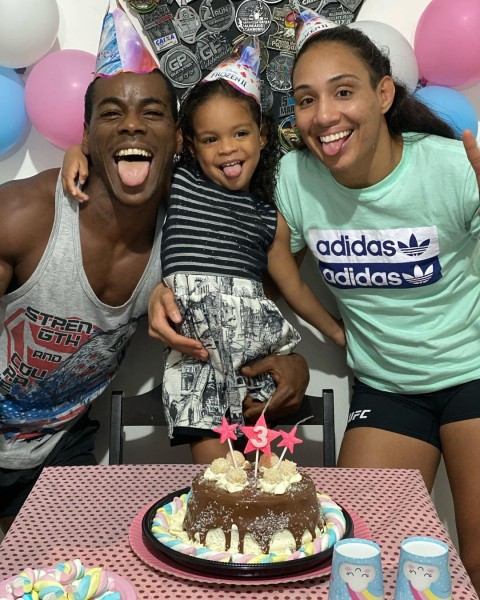 Taila, her husband, and their daughter SOURCE: Instagram @ Tailasantos. ufc

Taila Santos is living a happy married life along with her husband and their children. Taila has been married for more than five years. Although both are fitness freaks, her husband's name is not shared with the public. The duo has a daughter named Gloria.

After since there is no looking back to her career. Santos won her first fifteen matches playing at the professional level. Taila became a prominent figure in the Brazilian fighting club, Aspera Fighting Championship. She has won ten matches with a KO and two matches with submission, and the remaining four with decisions to date.

Taila made her UFC debut in 2019 up against Mara Romero Borella in February 2019. She lost her first match in the third round via a split decision. Following this defeat, Taila worked hard with her fighting style and her techniques. In her second matchup against Molly McCann in July 2019, Santos won the third round. Santos was scheduled to fight Montana De La Rosa at UFC Vegas 16 but the fight was called off after De La Rosa’s camp caught COVID-19.