Tage Nathaniel Thompson a.k.a. Tage Thompson is an American professional ice hockey center. As of 2019, he4 plays for the Rochester Americans in the American Hockey League (AHL) as a prospect to the Buffalo Sabres of the National Hockey League (NHL). Further, he was picked 26th overall by the St. Louis Blues in the 2016 NHL Entry Draft.

The twenty-one years old ice hockey center reportedly earns $925,000 per annum as salary and has an estimated net worth of $1 million in 2019. Regarding his relationship status, he is neither married nor single. Currently, he is dating his girlfriend, Rachel Stackpole.

How Much Is Tage Thompson Net Worth In 2019? Know His Salary

As of 2019, Thompson has an estimated net worth of $1 million, mostly earned through his NHL Career. Furthermore, he reportdely summoned $2,775,000 from his entire NHL career.

Tage Thompson, 21, is currently in a relationship with his long-time girlfriend, Rachel Stackpole. The two met at the University of Connecticut where he played ice hockey, and his girlfriend was a cheerleader. They started dating since 2016 and often appears in each other's Instagram account. 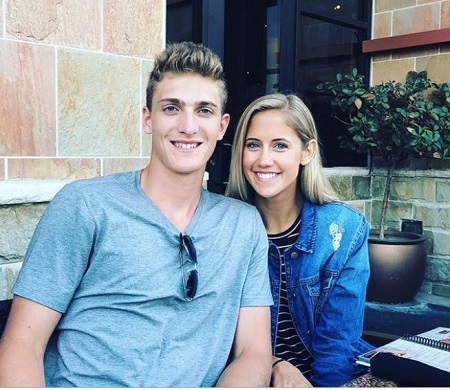 Besides, there is no information about Thompson's past affairs.

A native of Glendale, Arizona, U.S., Tage Thompson was born on October 30, 1997. His star sign is Scorpio. As per nationality, he is an American and belongs to the white ethnic background.

His father, Brent Thompson, was a former NHL player and current head coach for the Bridgeport Sound Tigers and mother, Kimberly Oliver is a house maker. Furthermore, he has a brother named Tyce Thompson, who attended Salisbury High School and played for the Dubuque Fighting Saints in the USHL. As of now, he is a prospect for the New Jersey Devils.

Thompson has lived across the US, attending 11 different schools prior to graduating from Pioneer High School in Ann Arbor, Michigan after his junior year at the University of Connecticut's request.

After playing in the U.S. National Development Team in the United States Hockey League, Thompson embarked on a collegiate career with Connecticut in the Hockey East conference.

On March 7, 2017, he signed a three-year, entry-level contract with the St. Louis Blues and immediately joined the Blues affiliate, the Chicago Wolves of the AHL, on an amateur try-out contract for the remainder of the 2016–17 season.

On July 1, 2018, Thompson was part of a trade by the Blues that traded Vladimír Sobotka, Patrik Berglund, a 2019 first-round draft pick, and a 2021 second-round draft pick to the Buffalo Sabres in exchange for Ryan O'Reilly.