Sydney McLaughlin is an American hurdler and sprinter who is the current world record holder in the women's 400 meters hurdles with a time of 51.90 seconds, recorded on June 27, 2021, at the United States Olympic Trials. In the event, she became the first woman to break 52 seconds. She finished her collegiate career at the University of Kentucky.

Dunellen, New Jersey native, Sydney McLaughlin was born on 7th August 1999, under the star sign Leo. She belongs to an athletic family: her father, Wille reached the semi-final in the 400 meters at the 1984 Olympic Trials while her mother Mary was a runner in high school. Further, her elder brother Taylor is a silver medalist in the 400-meter hurdles at the 2016 IAAF World U20 Championships.

How Much Is Sydney McLaugh's Net Worth In 2021?

To begin: professional hurdlers and sprinters make money from a variety of sources, including sponsorship deals, appearance money from race organizers, prize money from races, and incentive payments for breaking records.

Sydney McLaughlin who turned professional in 2018 soon signed a sponsorship deal with New Balance that same year in October. However, her paycheque from her sponsors or career earning details is yet to disclose.

Sydney McLaughlin is currently in a relationship with Andre Levrone Jr., a former NFL wide reviver who had a stint with various NFL teams such as Baltimore Ravens and Jacksonville Jaguars. He retired in 2020. 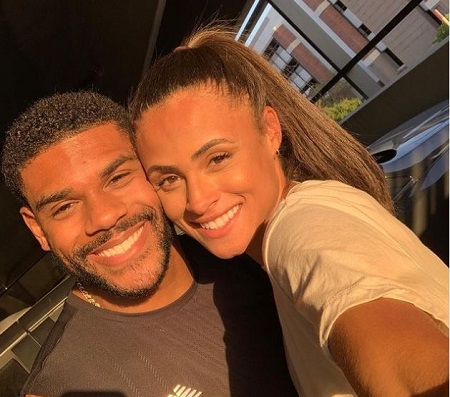 The couple has been dating for almost six months now. They came public in December 2020 with Andre giving an IG shoutout, "Heaven Sent." Meanwhile, Sydney posted his love in April 2021.

McLaughlin enrolled at Union Catholic High School in New Jersey where she was awarded 2X Gatorade National Girls Athlete of the Year trophies for 2015-16 and 2016-2017. Also, she won a gold medal at the World Youth Championships in the 400-meter hurdles event in 2015. She qualified for the 2016 Rio Summer Olympics, becoming the youngest athlete to make the US Olympic track and field team.

McLaughlin signed a National Letter of Intent to the University of Kentucky to compete for their track and field in November 2016. In March 2018, McLaughlin set the world's junior 400-meter record in (50.36) at the 2018 NCAA Division I Indoor Track and Field Championships.

Running 52.75 to win the event in her first SEC championship appearance on May 13, 2018, she broke the collegiate and NCAA record in the 400-meter hurdles. In June 2018 she forged her remaining college career to turn professional and signed a sponsorship deal with New Balance in October of the same year.