Alecia Kaorie Sutton a.k.a. Sug Sutton is an American basketball player who most recently played for the Washington Mystics of the Women's National Basketball Association (WNBA). She played high school basketball for  Parkway North High School and finished her collegiate career at the University of Texas. In the 2020 WNBA draft, she was selected by the Mystics with the 36th overall pick.

Saint Louis, Missouri native, Sug Sutton was born on 17th December 1998, under the star sign Sagittarius. She holds an American nationality and is of Afro-American ethnic background. The twenty-two years old stands 5 ft 8 in (1.73 m) tall and weighs 140 lb (64 kg).

How Much Is Sug Sutton's Net Worth In 2021? Salary & Contract

As of 2021, her net worth remains under the shades.

Sug Sutton is an open book: she shares every bit of her life whether it's personal or professional. On her Instagram where she has 10.1k followers, we can find her family, friends, games, and vacation posts but not her lovey-dobby posts.  As a matter of fact, Sug Sutton is all about "God, Family, Basketball."

Seems like, Sug Sutton is currently focused on her basketball career rather than being involved in a romantic relationship yet.

Besides, She is the daughter of Larry Sutton and Tonette Moore. Her nickname "Sug" short for "Sugar." was given to her by her father and grandfather. At the University of Texas, Sutton majored in health promotion and behavioral sciences.

Sug Sutton was selected by the Washington Mystics with the 36th overall pick of the 2020 WNBA draft. On 25th May, before the season's start, she was released by the Mystics. 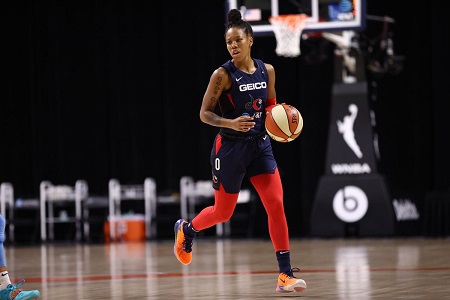 On 16th August, midway through the season, she was re-signed by the Mystics. On 19th August, she made her WNBA debut in a victory over the Atlanta Dream and scored her first WNBA points.