Steve Kornacki is an American Political Journalist. The multi-talented journalist is also a writer and television host. He currently works for NBC News as a political correspondent and writes for several other top-rated newspapers like The New York Times, The Daily Beast, etc.

Short Career in Journalism and Host

Steve started working as a reporter and for PoliticsNJ soon after graduating in 2002. He worked there until 2006. After leaving his work with Politics, Kornacki joined News 12 New jersey and started reporting in the U.S Congress for Roll Call. Also, he worked as a politics editor for Salon.

Kornacki worked for News 12 until 2011 and jumped to MSNBC as the co-host of The Cycle with another political strategist Krystal Ball and other jury members. He worked there until 2013, and since the beginning of 2014, Steve started working with MSNBC as an election coverage map correspondent.

Steve worked with the show for the next two years and then shifted to work as a host of the daily programs from 4 p.m. to 5 p.m. In 2017, Steve was named National Political Correspondent for NBC News Group. In 2-19, When the topic of impeachment of Donald Trump came to the surface, He started hosting a podcast for NBA News covering all the related topics' inquiries and queries.

In 2018, The Political commentator published a book with a title of The Red and the Blue: The 1990s and the Birth of Political Tribalism in 2018. As of 2020, Kornacki has appeared in NBC's Football Night in America show. He was there to break down the playoff pictures. It was his first time with Sports and received a good response to it.

Steve Kornacki has an estimated net worth of more than $5 Million. He credits most of his net worth to his successful time working with NBC in various shows as their host. However, The exact earnings and his fortune is still a matter of debate among the public-CheetSheet estimates it to be around $8 Million. 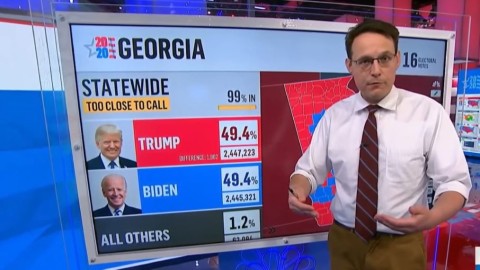 The average salary of an NBC News Anchors is $72,871. However, that range can be as high as $207,000 annually. Kacie McDonnell and Wendi Nix are two famous American Sports Reporter with a similar net worth to Steve.

It is a matter of the fact that Steve is gay. Kornacki opened about his sexual orientation in 2011 through a column in Salon. He is an active member of the LGBTQ community. Steve hasn't recently confirmed his relationship status, and there's no sign of a boyfriend or husband on his social media.

Steve once joked about being a faithful husband to "Ginny" for 14 years. However, the truth is yet to be revealed to the media. In 2020, Steve was labeled as one of the sexiest men alive by People Magazine.