Beuerlein, who won the Super Bowl with Cowboys in 1993, is married to his wife and has 4 children with her. He has an estimated net worth of $5 million in 2019.

How Much Is Steve Beuerlein Net Worth In 2019? Know His Salary

As of 2019, Steve Beuerlein has an estimated net worth of $5 million. He has earned his wealth widely through his 16 years long NFL career.

During his playing career in NFL, Steve Beuerlein reportedly made the career earnings of $22,238,265. His salary at the beginning of his career was reported to be $140,000 in 1990 and was the lowest-paid starting QB in NFL.

He then signed a contract with Cardinals worth $7.5 million in 1993 for three years. The Cardinals offered the annual average salary of $2.5 million, however, he was traded only after a season. Beuerlein, in his last season in NFL, was paid the annual salary of $1,127,700 in 2003.

Currently, he is serving as an NFL and college football analyst for CBS. The NFL analyst earns $100,000 as an annual salary from CBS Sports, which is the only source of his income currently. 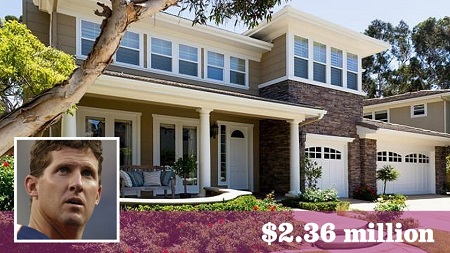 Steve Beuerlein is married to his longtime wife Kristen Beuerlein. The couple is the parents of 4 children- two sons Taylor, 21, and Jacob, 18, and daughters Kailey, 19, and Kendall, 12.

The couple, married for more than two decades, is living a happy life with no rumors of divorce yet.

Steve Beuerlein was born as Stephen Taylor Beuerlein on March 7, 1965, in Hollywood, Los Angeles, California, United States. His father is of German descent and Steve also has sibling bothers.

He holds an American nationality and belongs to mixed ethnic background.

Steve Beuerlein attended Servite High School where he played football for the high school team and also led them to the California Interscholastic Federation 1982 Big Five state championship. He was named the player of the year. He then joined Notre Dame in a full scholarship.

Steve Beuerlein was picked 110th overall in the 4th round of the 1987 NFL Draft by Los Angeles Raiders and made his debut with the team in 1988. He suffered an injury in the preseason game and was out for the whole season. Due to disputes with the club and owner, he was not started in the 1990 season.

Beuerlein then was traded to Dallas Cowboys, in exchange for a fourth-round draft pick, as a backup for Troy Aikman. After Aikman faced injury, Steve was used as QB and was later made regular due to his impressive performance. He made some appearance in the 1992 season and led the Dallas to the Superbowl championship defeating Bills.

As a free agent, Beuerlein joined Arizona Cardinals in 1993.

Despite finishing in the top-10 in almost every statistical passing category, he was not liked by the head coach Buddy Ryan. He was listed to the 1995 NFL Expansion Draft and was picked by Jacksonville Jaguars as the number 1 pick. He joined Carolina Panthers, the next season and signed a three-year contract.

Steve Beuerlein was traded to Denver Broncos in 2001 and announced his retirement in 2003.

After his retirement, Steve starting working as a  game analyst on CBS Sports' The NFL on CBS with Bill Cowher as a studio analyst, James Brown and studio host. He attends the NFL matches and provides game commentary. Besides, he also appears on college games occasionally.

Dude... that’s all part of the deal. We all dealt w those injury issues and most of us could only dream of being in a situation as good as his w the #Colts. I am just saying to go on IR would have been the right call instead of just walking away. Not overly complicated.

In the aftermath of the Colts quarterback Andrew Luck retirement announcement, Beuerlein, took to Twitter to express his displeasure of the timing of Luck's retirement.