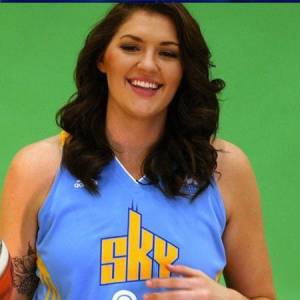 Who is Stefanie Dolson Dating? Is she a Lesbian?

Stefanie Dolson hasn't seemed to be married or engaged so far. There are rumors that she is currently in a romantic relationship with her girlfriend who is also a point guard in her team but the names and other facts are still not disclosed.

Dolson speaks frankly and openly regarding the sexuality of her and she also mentions that nowadays talking about same-sex, gay, or lesbian is a common thing. In most of her interviews, she simply says that there's no big deal in being a lesbian since the time and the generation has changed.

Furthermore, she has posted several photos with her girlfriend on her official social accounts and has alos shared their happy moments together. As exploring her social sites, it can be said that she is very much fond of traveling to different places.

Besides, she is an animal lover and has kept a pet dog with her.

How much is Stefanie Dolson Net Worth and Salary in 2019? Know about her Contracts

Talking about annual salary, the WNBA player is receiving a sum of money around $ 115,000 from the Chicago Sky in 2019. According to some of the official websites related to women basketball, Stefanie is one of the most reputed players in WNBA and her salary is sure to be increasing in future games.

No matter who or what you are always #betrue to yourself! #pride #iamwhoiam #standtogethernotapart #nike

Stefanie might have been in an endorsement deal with the Nike brand since she posted several photos of Nike shoes in promoting style. In addition to her financial earnings, she also has some personal assets which include the Mercedes car and some other cars as well.

Stefanie Dolson was born on January 8, 1992, in Port Jervis, New York to the parents Krystal and Steve Dolson. Stefanie is American by nationality and belongs to the white ethnic group. Further, her star sign is Capricorn.

Stefanie attended Minisink Valley High School in Slate Hill, New York. After completing her high school career, she joined the University of Connecticut for her higher studies and basketball career along with Breanna Stewart and Bria Hartley. She majored in communication sciences at the university.

Stefanie Dolson started playing basketball at an early age. However, she started her professional career in WNBA with the Washington Mystics after she was drafted in the 2014 WNBA Draft. After playing three seasons with the Mystics, she was traded to the Chicago Sky and her teammate  Elena Delle Donne was traded to Washington Mystics for the second overall pick in the 2017 WNBA draft.

Further, She scored 9 points with 2 rebounds in a 70-61 loss to the Minnesota Lynx on May 14, 2017, in her debut with the Sky. Along with the WNBA leagues, she also plays for the overseas team in overseas leagues in offseasons.

She has played for the teams like WBC Spartak Moscow Region(in Russia), Mersin Büyüksehir Belediyesi(in Turkey), Sichuan Whale(in China), Dike Napoli(in Italy). Talking about her recent contracts of the 2018-19 off-season, she signed with the Henan Phoenix of the Chinese league.