Stefan Frei is a Swiss professional football goalkeeper who plays for the Major League Soccer (MLS) side Seattle Sounders FC. A professional since 2006, he played for San Francisco Seals, San Jose Frogs, and Toronto FC. Moreover, he was named one of the best, or perhaps, the best goalkeeper in the MLS following the 2016 MLS Championship.

A native of Altstatten, Switzerland, Stefan Frei was born on 20th April 1986, under the star sign Aries. He holds a Swiss nationality but his ethnicity is yet to disclose. On 13 June 2017, he has officially become a U.S. Citizen.

Goalkeeper Stefan Frei has a base salary of $325,000 and along with compensation, he makes $337,500 from the Seattle Sounders. Roosters such as Nicolas Lodeiro and Raul Ruidiaz are the highest-paid athlete of the team.

Besides, he is partnered with Cleen Craft, a tasty lineup of sparkling hemp beverages, and often seen promoting the brand on his Instagram page. As of 2020, his net worth is approximately $2 million.

Stefan is married to his girlfriend, Jennifer. The couple exchanged the vows on 9th November 2013, in an intimate wedding ceremony. On his spare time, the footballer enjoys cooking and his time with his small family: wife Jenn and their four legs baby little Shar-Pei Cloi, and not-so-little Great Dane Mobley. 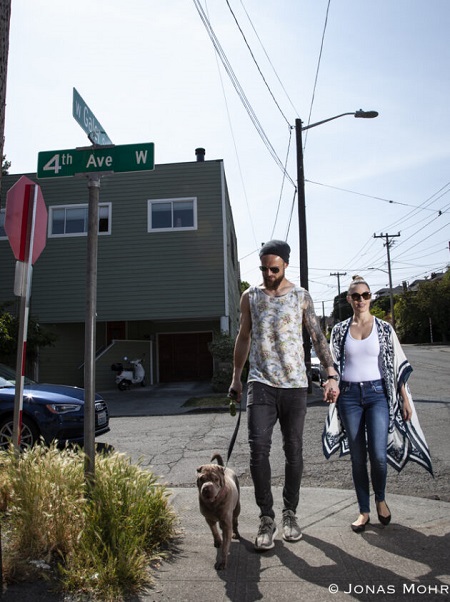 Stefan Frei with his wife and their pet SOURCE: Geekwire

Besides the Queen Anne's residence, Frei started painting in his spare time and has collaborated with companies and charitable organizations for his pieces.

Stefan is the son of Erwin Frei and Marlies Frei. Moreover, his the second-cousin of Alexander Frei who is the retired captain and all-time leading scorer for the Swiss national team.

During the late 1990s, he moved from Switzerland to the United States and enrolled at d De La Salle High School in Concord, California. Upon graduation, he joined and played college soccer at the University of California, Berkeley.

At the 2009 MLS Player Combine in Fort Lauderdale, Florida, Frei was named MVP and signed a Generation Adidas contract. Further, he was picked in the first round with the 13th overall pick by Toronto FC in the 2009 MLS Draft. On 21st March 2009, he made his professional debut in team first game of that MLS season against Kansas City Wizards. Overall, he played five seasons for the team, making 82 competitive appearances with no goal at all.