A Dutch professional football player Stefan De Vrij is playing with A club Inter Milan as well as playing for the Netherlands national football team as a central defender. As a youth, he played for the local club VV Spirit and started his professional career with Feyenoord in 2009.

Since 2018, Vrij has been playing with the team of Inter Milan. Due to his amazing performance, Vrij has taken home multiple awards, including the Serie A Best Defender (2019-20).

This Dutch athlete, De Vrij, developed himself quite well and fitted in the Serie A. As of now, he is estimated to have a net worth of around $14 million.

He has earned a name, fame, and wealth widely throughout his professional career as a footballer. Currently, he is signed to Inter Milan, earning £117,000 as his weekly wage and £6,084,000 as his annual salary. Besides that, Vrij's market value is €20 million, while the highest value was €60 million on December 12, 2019. Aside from his football career, De Vrij also earns much from his endorsement deal with famous brands, including Macron and Puma. Currently, he resides in an apartment in Rotterdam, Netherlands, together with his partner.

De Vrij is currently dating his girlfriend, Doina Turcanu. The couple has been together for a year and can be seen enjoying their time together.

Doina is an Instagram model, and the duo has posted several pictures of each other on their Instagram. Moreover, Doina lights her birthday candle in July.

De Vrij previously dated ex-girlfriend Malose Buitelaar, who is also his childhood friend. The two have been dating each other since 2010 and got engaged in 2012 after 2-year of courtship. The couple ended their six years of relationship in 2016 and separated mutually. 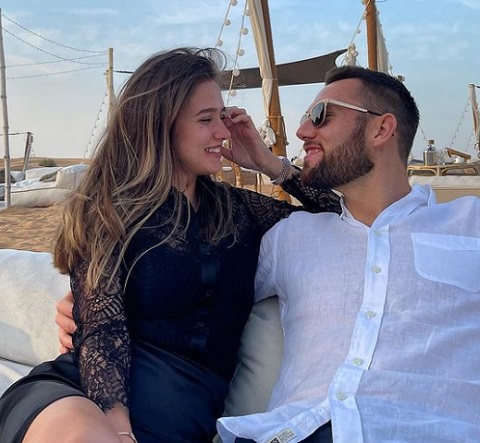 The Native of Rotterdam, Netherlands, Malose attended Krimpenerwaard College and graduated in 2012 from Schoevers.

He stands 6 feet and 2 inches tall in height, which is around 1.83m. He has maintained his body fit.

On July 17, 2009, Stefan De Vrij signed his first-ever professional contract with Feyenoord. He made his first-team debut in the KNVB Cup 0-5 away win against Harkemase on September 24, 2009.

Likewise, on December 6, 2009, De Vrij made his Eredivisie debut representing his native club against FC Groningen in a 3-1 win.

From 2009-14, he made 135 appearances overall, scoring seven goals for Feyenoord.

On July 30, 2014, the player arrived at Serie A club Lazio, signing a contract for an undisclosed fee. On August 24, he made his first appearance for the club in the 3rd round of the "Coppa Italian" against Bassano Virtus in a 7-0 home win. A week later, Vrij made his Serie A debut in a 3-1 defeat against A.C. Milan. He played 95 matches for the club wearing shirt no. Three and scored five goals. He then left the club in 2018

De Vrij joined Inter Milan in July 2018 and signed a five-year contract with the club. And the footballer has already made over 130 game appearances.

On November 21, 2007, De Vrij made his Netherlands U16 National Team debut in the friendly match against Ukraine, which ended with a 1-0 win. He was also a member of the Netherlands U-17, which played in the "2009 UEFA European U-17 Football Championship" in Germany.

He was also the U-17 team member that grabbed the second position in the European Championship and qualified for the "2009 FIFA U-17 World Cup" in Nigeria.

Likewise, Vrij is one of the footballers to be listed in the national team participating in the FIFA World Cup 2022.

A native of Ouderkerk aan den Ijssel, Netherlands, Stefan De Vrij was born on February 5, 1992. His father, Jan de Vrij, is a former professional football player who played for the local football club VV Spirit. He grew up with his older brothers, Niels and Eric. They both played football in their youth.

At the age of 5, De Vrij joined VV Spirit and then switched to Feyenoord in 2002.